Since its identification in December over 63,000 confirmed cases of COVID-19 (commonly referred to as “coronavirus”) have been discovered. The World Health Organization has recorded 1,383 deaths.[1] Approximately 80% of confirmed global cases and 95% of all deaths caused by the disease have occurred in the Chinese province of Hubei.[2] Wuhan, the capital of Hubei and the city where COVID-19 is believed to have originated, has effectively been closed off to the outside world by a central government-enforced quarantine.[3]

Although this policy may have helped slow the spread of the deadly virus, it has proved catastrophic for industries that rely on Wuhan. Commonly described as the “Motor City of China”, Wuhan is a pivotal cog in the global automotive industry. IHS Markit forecasts that coronavirus could cost China the production of 1.7 million cars, roughly a third of its total production.[4] But it is not just domestic manufacturers that have been impacted. The South Korean auto industry imports 29% of its intermediate parts from China and shortages of have already caused Hyundai and Honda to shut down their entire Chinese supply chain and begin to look elsewhere for critical components.[5]

There are economic implications that extend past the industries with facilities in Wuhan. The city is also viewed as being a pivotal hub for the logistics chain that links central China to its seaports and the global economy at large. While it is not known how far-reaching the effects of coronavirus will be, it has been estimated that China’s economic growth will slip below 6% for the first time since the 1980s because of the epidemic.[6] This number likely will only increase if the virus is not contained by April and there are many worrying signs that it will not be.[7],[8]

As coronavirus spreads there are concerns it will be as disruptive in other Chinese provinces that play a central role in the global value chains. Guangdong province, home to industrial centers like Shenzhen and Guangzhou, is host to almost 30% of China’s entire semiconductor industry.[9] The province is also the largest importer and exporter in China. Guangdong has yet to implement any travel restrictions in its cities, but the municipal governments of Shenzhen and Guangzhou have enacted emergency powers allowing property seizure to prevent the spread of cases.[10]

Risk spreads outside of China

In addition to the tremendous impact on the health and wellbeing of individuals, the impact of the coronavirus has been amplified by economic conditions that are are not exclusive to China. Other countries in East Asia, such as Malaysia, have also wed foreign investment with state-centered development policy creating geographic centers focused entirely on several or even one specific industry.[11] While this surely has been beneficial at helping the rise of developing economies, it creates highly concentrated sub-tier ecosystems that at prone to single points of failure. This is called geographic concentration risk, which occurs when a large number of suppliers within a given supply chain are located in a single geographic region, making the businesses that depend on them unusually vulnerable to disruption within that region. Geographic concentration risk is largely born out of convenience and cost reduction, it’s easier and cheaper for industries to operate in areas that have already built the necessary infrastructure and attracted the talent required to do business. But this convenience clearly has its costs.

Being aware of such risks may not prevent organizations from being impacted, but it will help them ride the waves of disruption with more agility than their competitors. 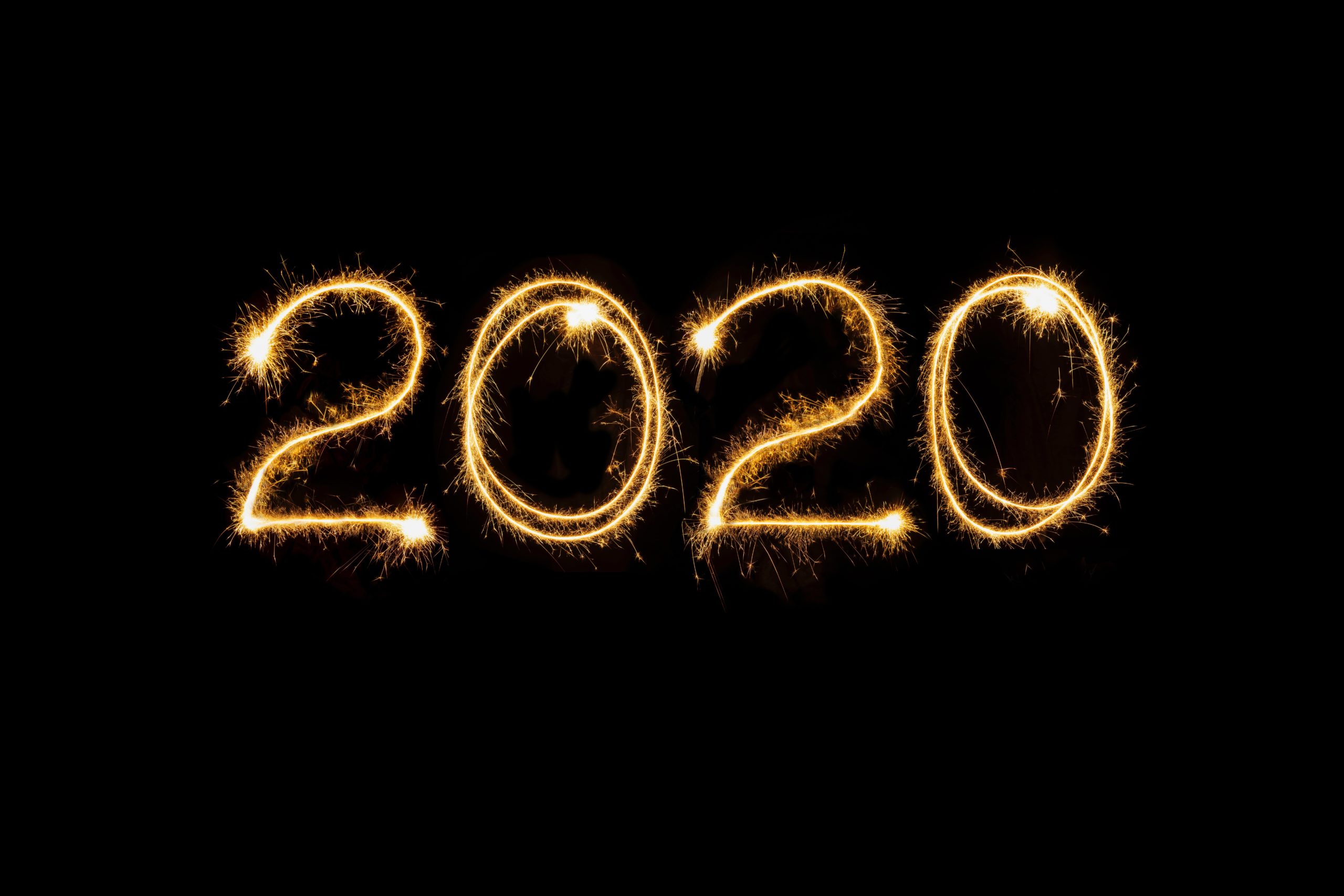 A happy (if slightly-belated) 2020 to all of you. As a business, Interos is all about looking forward into the unknown, both through our cutting-edge technology, and our commitment to proactively identifying and evaluating global third party (and 4thparty and 5th party….) risk. I thought I would take the opportunity to share some of what we have identified as the most-impactful and most-likely events that will impact TPRM in 2020, and how our product is rising to meet those challenges.

Economic Slowdown – Since the economic crisis of 2009, countries across the globe have repeatedly lowered interest rates as a form of quick stimulus. Many nations have low or even negative interest rates. Should a global economic slowdown occur in 2020 those countries will have limited options for a quick economic boost. China presents a particular risk from this point of view, given:

Any of these could dramatically increase the price of exports, which would be ultimately passed on the American consumer, causing a dramatic shrinkage in that market. Outside of China, a global increase in nationalist economic policies (such as increasing tariffs, withdrawal from treaties, restrictions on direct and foreign investment) may threaten the stability of the global economy by increasing trade barriers and thus the odds of a global economic slowdown.

Green Swan Events – A freshly coined term by the Bank for International Settlements (and a play on the term ‘black swan’) describing unpredictable climate events with tremendous impact. Traditional black swan events are by their definition extremely unlikely and impossible to forecast. In contrast green swan events are, in the estimation of most scientists and economists, certain to occur because of the widely agreed upon consequences of climate change. The only unknowns are when, where, and what the cost will be. For example, the number of extreme weather events has quadrupled over the last 40 years, and it only takes a single disastrous hurricane in the wrong location to cripple a financial center or knock out a key piece of critical infrastructure.

Labor in Taiwan – Taiwanese companies are some of the largest employers of Chinese citizens. However, as tensions between the two countries increase over the issue of Taiwanese sovereignty, the region’s bustling semiconductor industry could be put in jeopardy, threatening the global availability of the most basic computer hardware and greatly damaging the global economy.

Shipping Regulatory Changes – While regulatory changes to international shipping are less immediately eye-catching than the impacts of global warming, they are, unlike other risks, definitively occurring and already impacting the world economy. The International Maritime Organization’s goal of substantially cutting carbon emissions will incur an estimated $1 trillion price tag, the cost of outfitting ships with carbon scrubbers (controversial devices designed to remove pollutants from seawater) or switching to alternative fuels. There’s significant regulatory confusion as to what kinds of carbon scrubbers will be allowed and who will shoulder the burden of adapting to these planet-saving measures. Regardless of the exact outcome, the cost of shipping goods internationally is rising.

Russian Mobilization in Syria – For its entire existence Russia has had to grapple with the challenges of being a largely (and just plain large) landlocked nation. Their increasing presence in Syria is certainly due to that region’s access to warm water ports. It also offers Russia’s relatively small navy outsized influence in the Mediterranean, and thus great influence over the shipping of critical natural resources and how easily they can reach western Europe.

Unrest in India – For many Multinational Corporations, India has been a key growth market for several years, with many industries expecting the same surge in economic opportunity seen in China over the past decade. However, the IMF recently downgraded expectations for the country’s growth by 1.3%, with their growth premium over emerging markets falling to a 7-year low. These low forecasts could be further exasperated by the rising tide of Hindu nationalism and anti-Muslim sentiment, a mindset that is being enshrined in Indian law by the Modi government, and the country’s tightening grip on the region of Kashmir. These factors all set the stage for significant social and political upheaval which could greatly destabilize this vital market.

Brexit – Despite Boris Johnson cementing control of parliament, which swiftly ushered in the UK’s exit from the EU on January 31st, the uncertainty posed by Brexit will continue unabated as the two parties negotiate the precise terms of their future relationship. Regardless of how the details plan out, organizations around the globe will have to adapt to new trade laws, industry standards, financial regulations and more before the dust settles.

So how can you tackle these diverse, globe-spanning risks? By addressing the problems with fundamental business processes that underpin all major transactions. That’s why, for Interos, 2020 is the year of redefining due diligence. While that may sound a little unexciting, it’s of vital importance as it a connotes a comprehensive appraisal of the opportunities and vulnerabilities in working with interconnected companies and countries around the world. Why does Due Diligence need a rework?

It’s clear that traditional, point-in-time due diligence isn’t enough. Companies are failing to discover key information about their partners and vendors at time of signing and aren’t keeping up with relevant vendor changes that occur over the course of contracts, leading to renegotiations, delays, and other costly activities. 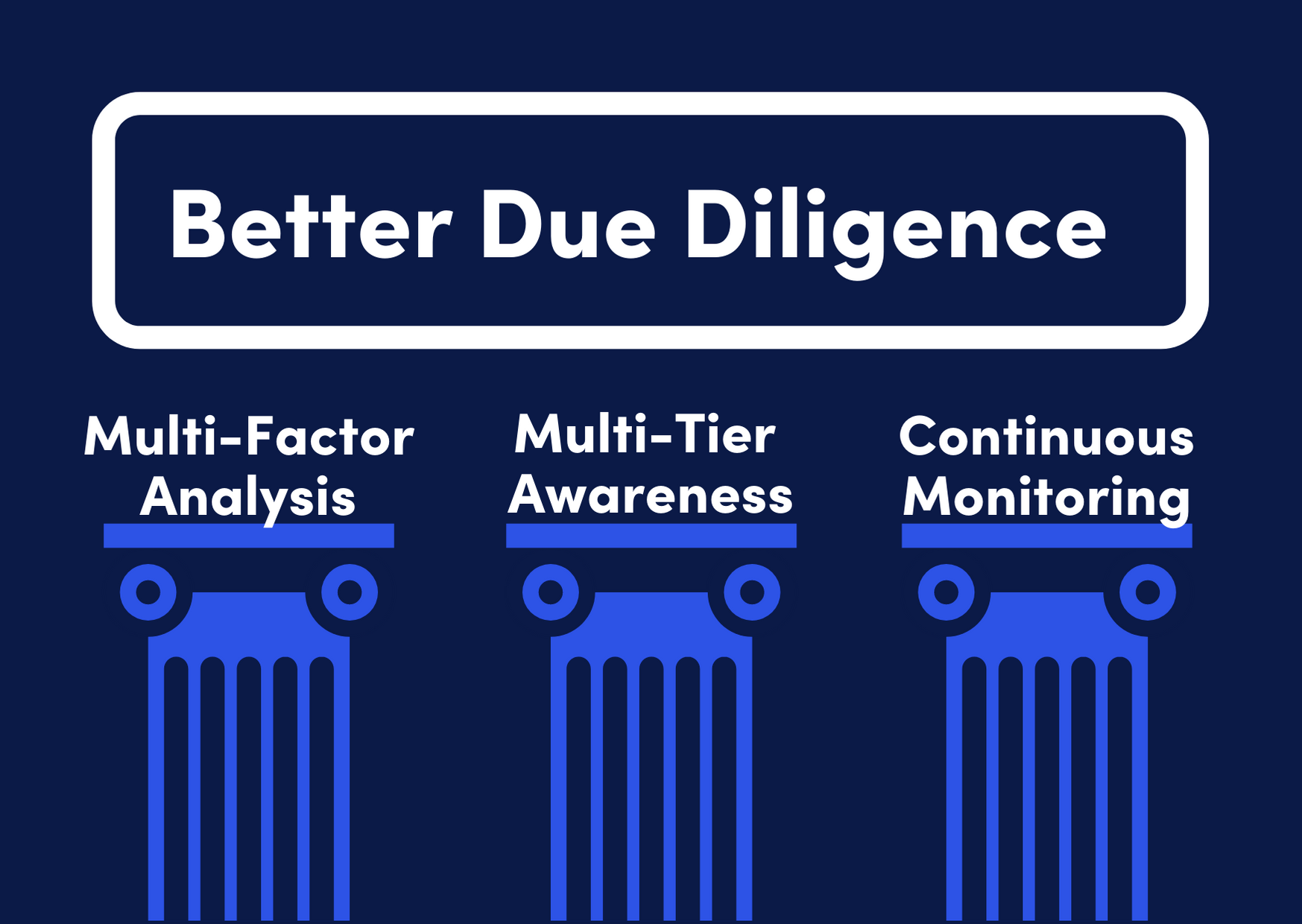 Our approach to newer, better due diligence rests on three pillars:

To support organization in their efforts to improve risk management through a a better kind of due diligence Interos is creating a product that offers real-time multi-tier risk visibility with prioritized and quantifiable insights across multiple factors. We know organizations are tired of a due diligence process that rests solely on vendor inputs on lengthy surveys – or risk rating platforms that provide vague scoring. We know companies need a scalable solution to managing third party risk that acts as an independent, trusted authority that’s up-to-date every day, not just one day.

So, here’s to the new due diligence in 2020! We look forward to making it a year of faster and better-informed business decisions, taking one massive step towards our mission of absolute certainty in an interconnected world!