Arlington, VA. – November 12, 2020 – Kearney, a leading global management-consulting partnership in more than 40 countries, and Interos, providers of the leading AI-based supply chain risk management solution, today announced the immediate availability of INSITE™. The solution is the first end-to-end offering for early detection of distressed suppliers throughout multi-tier supply chains. It provides rapid triage and response – including actionable insights to meet emergent supplier needs, as well as identification of alternative sources.

“Our extensive experience optimizing supply chains of many industries has given us the knowledge and expertise that help our clients create resilient operations. The global pandemic, new policies and regulations have created unprecedented systemic challenges. This unique combination of Kearney’s industry knowledge and Interos technology platform for early detection and rapid response has become essential for sustained resilience.” said Ryan Elliott, Partner at Kearney.

Already deployed to assist the U.S. Department of Defense and its suppliers in optimizing performance of the most complex supplier ecosystems, INSITE is now available to commercial organizations. INSITE provides the total stack of capabilities needed to discover, assess and triage at-risk suppliers. These include: multi-tier mapping of physical and digital supply chains; rapid financial, operations, geographic, and governance risk-assessment; ongoing monitoring; and actionable plans for its most at-risk suppliers in 30/60/90 day intervals.

“COVID-19 has been a galvanizing moment for the third-party risk management industry, as unanticipated risk — hidden deep in physical and digital supply chains — is being exposed, and organizations are being negatively impacted,” said Jennifer Bisceglie, CEO and founder of Arlington, Va-based Interos. “INSITE makes it possible for federal and commercial entities to not only continuously monitor for physical and digital supply chain risk end-to-end, but to also triage and quickly remove that risk altogether.”

As a global consulting partnership in more than 40 countries, our people make us who we are. We’re individuals who take as much joy from those we work with as the work itself. Driven to be the difference with our clients, our communities, and in society, between a big idea and making it happen. For more information, visit www.kearney.com. 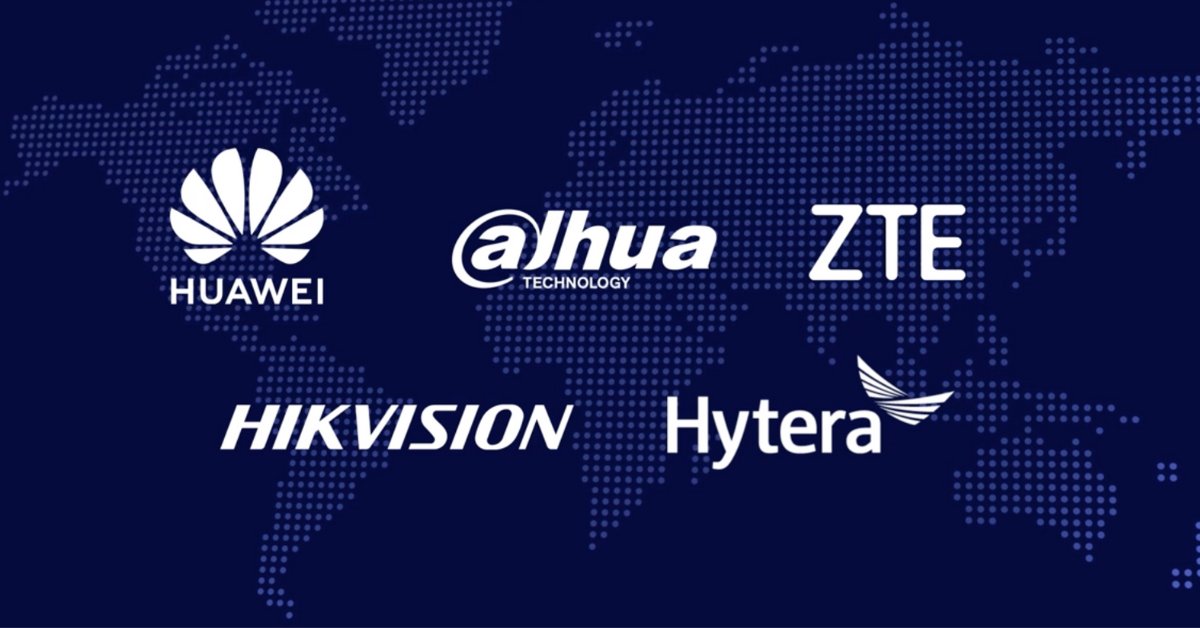 Section 889 Part B of the 2019 National Defense Authorization Act (NDAA) explicitly prohibits government agencies from contracting with companies who use telecommunications equipment from 5 Chinese companies including Huawei and ZTE. The rule went into effect earlier this year on August 13th. On October 26th the government issued an addendum which removed the requirement for contractors to certify compliance on an offer-by-offer basis, instead allowing them to recertify once annually via the System for Award Management (SAM).

However, changes to the language in the SAM representation have left some contractors feeling that compliance may not be possible. Unlike the original language included in the NDAA provision, which limited the scope of the law to “substantial or essential component[s]” or a “critical technology,” the new SAM representation specifies no limit to its applicability. This new language could prevent contractors from certifying their compliance if they only use the prohibited technology outside of their government work, and it applies regardless of how many tiers/parties away the technology sits in a contractor’s supply chain.

It remains to be seen if the government will amend or clarify the language in SAM to more closely reflect the narrower scope of the 2019 NDAA, or if this broad interpretation will be fully enforced. For the time being, contractors seeking an annual certification will have to play it on the safe side and either request a waiver, or invest in supply chain management solutions that can assess their vendor ecosystem for compliance, continuously, across every tier. Interos’ own estimates suggest there are several hundred subsidiaries and affiliates that fall under current Section 889 guidelines.

Interos CEO Jennifer Bisceglie, in an interview with NextGov, stated that “the challenge is that we want something that industry can actually accomplish,” Bisceglie said. “And right now, there’s just no way to accomplish it as it’s written.”

Many contractors have echoed Bisceglie’s sentiments. Others have also advocated for a more case-by-case, system by-system approach to risk management that enables companies to exempt specific uses of covered technologies in cases where there may be limited exposure to government systems or the given technology is used in such a way that presents limited risk. Contractors have also argued that the current language will, due to its broad scope, effectively mandate audits, something the government explicitly said they would not do for Section 889.

Of course, the challenges posed by Section 889 aren’t new to this particular revision. As we indicated in our whitepaper “The Top 5 Things You Don’t Know About Section 889,” there are plenty of concerns for contractors, including connected ESG issues and the difficulty in ensuring that excised companies don’t slip back into your supply chain through a third party vendor.

To learn more about how Interos can help track Section 889 compliance, click here. 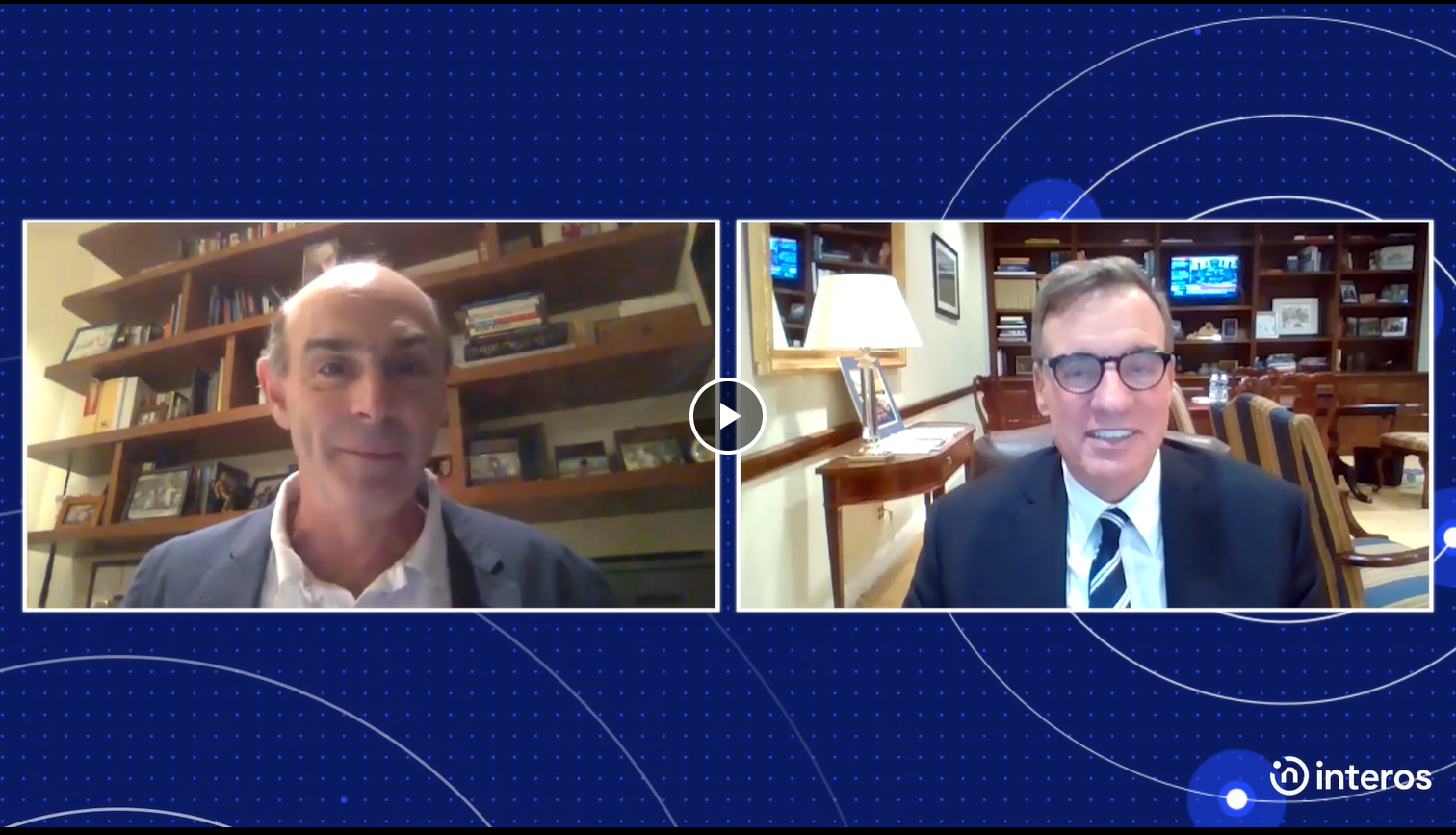 Interos’ 2020 summit for the Financial Services Industry (FSI) featured Sen. Mark Warner in conversation with investor Ted Schlein in discussion on industrial policy. A former investor and venture capitalist, Sen. Warner is intimately familiar with the intersection of business, technology, and government. As part of his official duties, Sen. Warner serves on the Senate Finance and Banking Committees. This blog will provide a brief overview of some of the topics raised in their conversation. For the full talk and the rest of the Interos summit, click here.

The History of American Investment in Technology

A significant portion of the conversation focused on the perception generated by differing approaches to industrial policy. Ted Schlein opened their conversation with a quote from the Senator from last year: “We in this country have avoided the notion of industrial policy where the government tries to pick winners and losers. But when we compete with a nation with the size and scope and the focus of China, [current policies] may need to be rethought.” Sen. Warner went on to remark that, while the U.S. has stepped back from direct technology investment in recent years, that wasn’t always the case. Examples include:

The two projects serve as time-tested examples of the positive results of direct US investment in technology development.

A central topic of discussion was the U.S.’ increasingly tense relationship with China. Sen. Warner was careful to clarify that international trade friction should not be used to disparage Chinese Americans or the Chinese diaspora, but that that macro concerns over unfair treatment by the Chinese govt needed addressing. The senator highlighted a number of concerns including:

The allure of access to Chinese markets has led to increasingly dubious tradeoffs for American businesses, some of whom have adopted stances encouraged by the CCP, such as removing Taiwan from airline maps.

The Senator also highlighted that while the Chinese model of economic development encourages domestic competition in nascent industries, once a clear winner emerges the Govt will essentially designate that company as a leader for all of China, conferring numerous benefits including access to unlimited financing and access to developing countries as part of China’s Belt and Road and Digital silk road initiatives.

This makes real competition against these companies almost impossible, and ensures these leading businesses prioritize the needs of the CCP, even over their own shareholders, while creating international powerhouses that can secure control over standards setting bodies.

The Senator went on to highlight that in the future, military and economic alliances will potentially need to be bolstered by technology alliances of like-minded countries who recognize the need to foster fair international competition and advancement, while maintaining technical parity with China.

Sen. Warner took a few moments to acknowledge the potential disruption and confusion surrounding recent federal initiatives encouraging decoupling from China, voicing concern that we could do a better job of explaining such efforts to our allies or risk alienating them.

“I worry at times, that if we don’t also do that kind of education process with our allies, that this turns into ‘Are we going to believe the Americans? Are we going to believe the Chinese?’ This kind of decoupling effort, where countries are then forced to make a pick, not maybe based upon our values, or not maybe based upon kind of our traditional alliances, but just who do we think is going to win this competition? That’s not always good for us.”

America’s alliances are one of the primary drivers behind the structure of much of our global supply chains. As the Senator points out, ensuring clear communication to our allies of the reasons behind (and complexities of) regulatory efforts is critical to their success.

Click here to view the summit in full or visit the rest of our website to learn more about Interos.