Why Drought Risk Must Be Upgraded in Supply Chain Decision-Making

As if a pandemic, war, labor strikes, and rampant inflation weren’t enough, supply chain leaders now have another disruptive force to contend with – mass-scale drought.

From the U.S. and South America to Western Europe and China, record-breaking heatwaves and exceptionally low rainfall are disrupting not only agriculture, but also power generation, manufacturing, and logistics, necessitating drought risk management on a massive scale.

For many companies, severe water scarcity will be the first tangible impact of the relationship between climate change and supply chains. It should act as a wake-up call to take this category of supply chain risk more seriously and model it more systematically in footprint investment and supplier selection decisions.

Manufacturers are suffering from the heat

Farmers and agricultural producers are used to drought risk and their crops being at the mercy of extreme weather, from major storms and floods to wildfires and drought. But for manufacturers, recent events are more unusual, and make operational resilience more important than ever before.

In Germany, chemicals firms and car makers are among those that have been affected by low river levels in the Rhine, making it impossible for the biggest barges to transport their products to ports and onwards to customers.

Almost half of Europe is currently experiencing drought, according to a new European Commission report – the worst situation in 500 years.

In China, which is battling its most severe heatwave on record, hydroelectric power plants have been taken offline this month by low water levels in the Yangtze River. This has forced many manufacturing firms in Sichuan, Zhejiang, Jiangsu, and Anhui provinces to suspend operations.

While the scale and intensity of this summer’s droughts are the worst for many years, they shouldn’t come as a big surprise to companies that have been following discussions about climate change and supply chain risks:

As climate change increasingly impacts supply chains, the implications are dire. Interos’ proprietary risk i-Score shows that in terms of “natural disasters” (an attribute of operational risk that includes meteorological and climatological events):

A Gartner survey of procurement leaders in the DACH region last year found that extreme weather and natural disasters were rated as the third highest risk for the next 2-3 years after cyber attacks and supply shortages.

A quarter of the sample also rated climate change as very or extremely concerning, putting it ahead of pandemics, geopolitical tensions, and trade disputes (see chart). 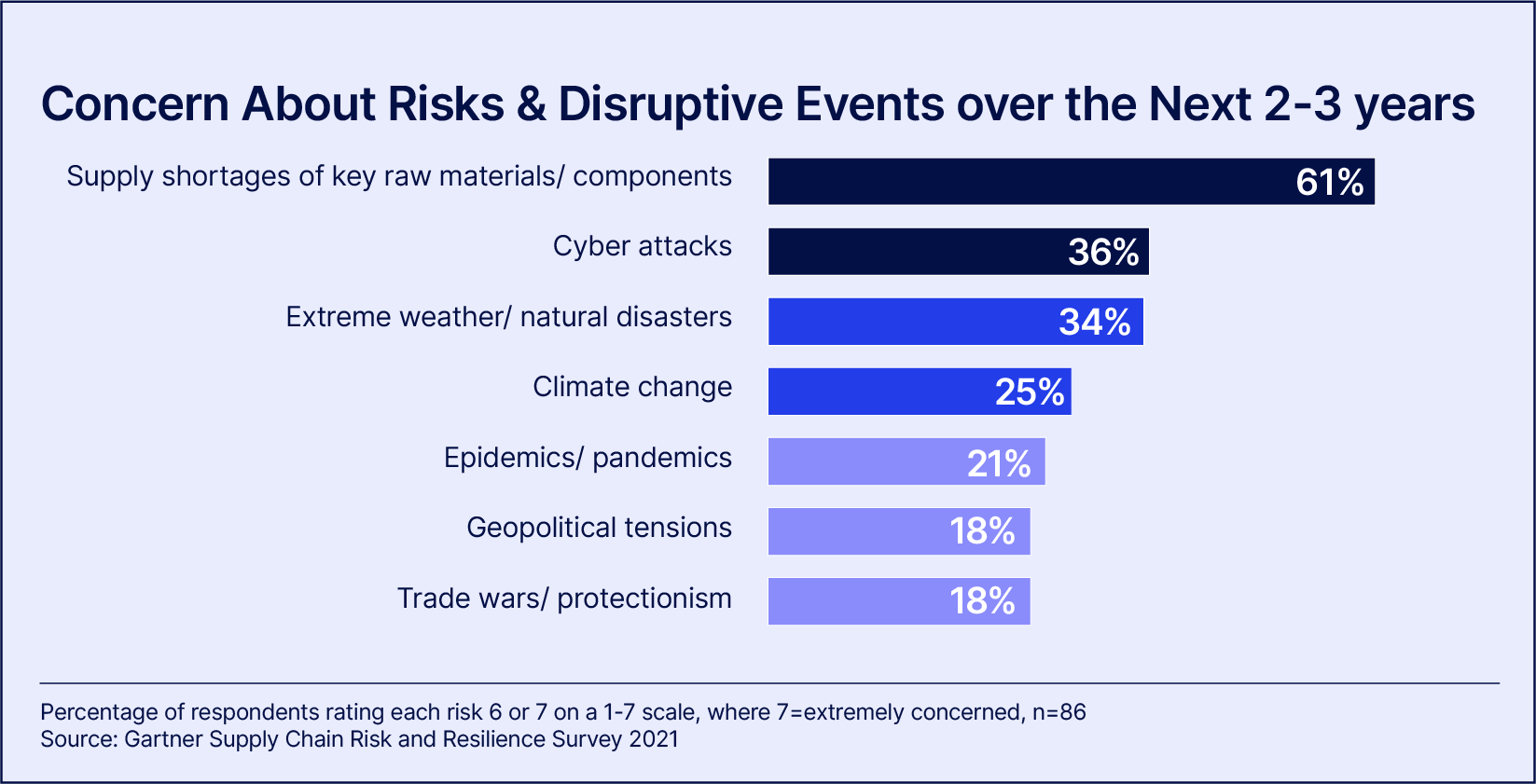 Sentiment in the U.S. and other parts of the world will no doubt vary somewhat, but these findings demonstrate that drought risk management and other extreme weather concerns are recognized as more significant supply chain risks than they would have been a few years ago.

Another recently published Gartner survey found that just 11% of 320 supply chain leaders “do not consider climate change as a future risk”.

This last finding is a little concerning, given the extremely hot and dry conditions afflicting so many countries in recent months.

The lesson must surely be that the risk of drought risk management – along with other disruptive weather considerations – is no longer as predictable and as confined to certain areas of the world as it used to be. The future is going to look different than the past, so relying solely on historical patterns is dangerous.

Instead, companies are going to need to model climate change-related supply chain risks much more diligently than they have previously when deciding where to build new manufacturing and distribution facilities, and when making critical supplier selection decisions.

To learn about how the Interos platform can help to protect your supply chain from drought risks and other potential impacts of climate change, visit interos.ai.