Ripple effects from the war in Ukraine continue to threaten global stability and expose European dependence on Russian gas.

This is seemingly a tit-for-tat continuation of ongoing economic warfare. Poland had just extended sanctions on 50 Russian oligarchs and companies, including Gazprom, which informed the countries of the natural gas suspension.

As the humanitarian catastrophe in Ukraine continues unabated, this is simply the latest example of the second-order effects stemming from Russia’s invasion that will continue to propagate across the globe.

Russia supplies more than 90% of Bulgaria’s gas needs. Poland is less dependent, having invested in infrastructure in a liquified natural gas (LNG) terminal years ago. Later this year, the “Baltic Pipe” will open, bringing Poland more natural gas from Norway and helping to reduce Europe dependence on Russian gas.

Russia accounts for 40% of EU natural gas, a dependence that has prompted many European countries to begin weaning off Russian gas to various degrees. In March, the European Commission announced a plan to cut Russia natural gas imports by two-thirds by the end of the year. As European Commission President Ursula von der Leyen explained, “We simply cannot rely on a supplier who explicitly threatens us.”

Russia has thus far only “suspended” gas delivery to Bulgaria and Poland. Still, these initial suspensions haveraised the alarm across the region that Russia may continue to make good on its threats. This concern – and dependence – varies significantly across Europe, as Europe dependence on Russian gas is not uniform across the continent.

Poland and Bulgaria rank sixth and twelfth among European buyers of Russian natural gas. Germany, Turkey, Italy, France, and Austria were the top recipients during the first half of 2021. European allies and those Putin has labeled “unfriendly countries” have prioritized resilience in expectation of future suspensions.

Collective Resilience in the Face of Europe Dependence on Russian Gas

Part of the European Union’s ongoing plans to diversify its natural gas supply chain includes importing from reliable sources, such as strengthening imports from Norway, where it gets 16.4% of its natural gas, and expanding natural gas imports from the U.S. In March, the Biden administration announced that the U.S. would ship an additional 15 billion cubic tons of LNG to Europe through the rest of the year. While questions remain on accomplishing the logistics behind this commitment, it is yet another sign of the deepening unity across Europe, the U.S., and global democracies in light of Russia’s invasion of Ukraine.

This increase in unity will likely be necessary to offset the unintended ripple effects of Russia’s foreshadowed cutoffs. While Bulgaria and Poland are not considered essential global trading partners by many metrics, a closer look at global supply chains reveals more about American and European dependence on Russian gas.

Interos analyzed U.S. and European (EU+UK) reliance on Bulgaria and Poland, mapping connections to those countries. While direct (Tier 1) connections were unsurprisingly low, Tier 2 and Tier 3 connections expanded into the hundreds of thousands. 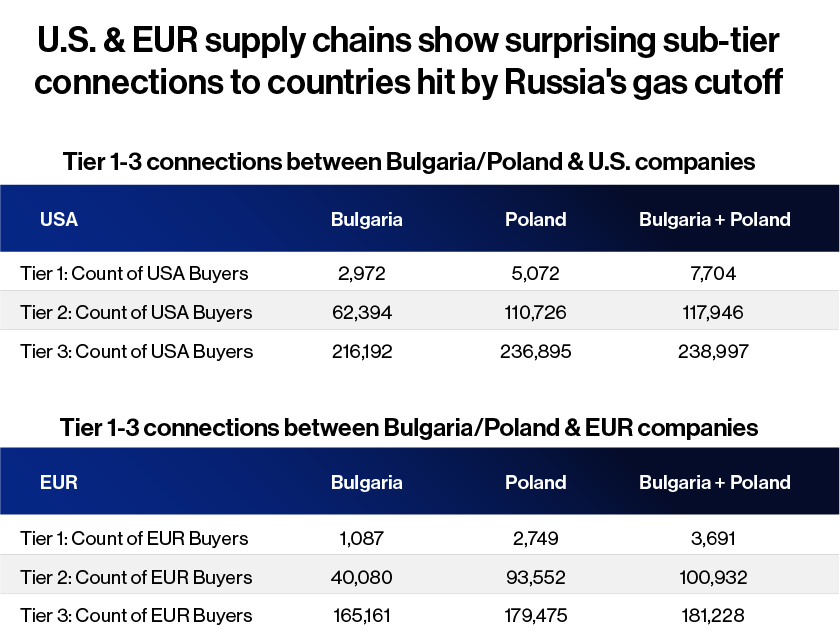 For comparison, our analysis of U.S./EU reliance on Russia and Ukraine found that more than 190,000 firms in the U.S. and 109,000 firms in Europe have Russian or Ukrainian suppliers at Tier 3. Many EU and U.S. firms rely on Poland and Bulgaria once accounting for sub-tier supply chains. This suggests that cutting off Russia natural gas may have wider-ranging implications than expected.

As is true across the broad range of supply chain shocks over the last few years, the challenges are too widespread and complex for any single organization or government to solve on its own. Bulgaria has been in talks with Greece and Turkey to cut its dependence on Russia for LNG, with Greece publicly offering recent support to Bulgaria. While the gas suspension intends to weaken resolve across Europe and its allies, it likely will continue to have the reverse effect. With Germany halting the Nord Stream 2 natural gas pipeline earlier this year and dropping opposition to a Russian oil embargo, this latest gambit by Russia likely will only deepen ties and accelerate efforts to phase out dependence on Russian natural gas and other commodities.

Despite these efforts, there are concerns of stockpiling that could drive up natural gas prices across the globe, prices that are already spiking. In the U.S., natural gas prices hit a 13-year high in April. At the same time, European gas storage hit a five-year low at the end of the winter and continues to rise following Russia’s suspension of Bulgaria and Poland. In preparation for winter demand, energy rationing could also stunt economic growth, persist inflation, and potentially instigate a recession.

Many are forecasting continued volatility in the natural gas market throughout the year, due in part to Europe dependence on Russian gas, and concerns over additional supply chain disruptions continue to grow.

Those numbers are slightly smaller for European companies, with almost 4,000 companies having Tier 1 connections and about 180,000 with Tier 3.

Russia’s suspension of natural gas to Bulgaria and Poland has instigated uncertainty within the environmental, social, and governance (ESG) investment market. The U.S. commitment to increase LNG supplies to Europe may come with externalities, including investing in the LNG import and export terminal infrastructure required to export LNG at scale. These LNG investments require capital, which ESG investor groups often deny in favor of clean energy investments. Those priorities may shift to meet this commitment so as to reduce Europe dependence on Russian gas. That said, as part of its decoupling from Russian energy sources, the E.U. could more quickly expand investments in renewable energy to meet its net-zero commitments.

Finally, suppose the “unfriendly countries” continue to deepen their resolve in support of Ukraine. In that case, Russia not only may extend the natural gas suspensions as part of the ongoing tit-for-tat economic warfare, but the Putin regime may accelerate and expand its hybrid warfare, resulting in the need for improved cyber supply chain risk management. Microsoft’s recent report highlights the malicious cyber activity of six state-linked actors and 237 operations against Ukraine. As NotPetya illustrated, Russia’s targeted activity has a history of spreading into the wild. There also are growing concerns about military expansion beyond Ukraine. Explosions in the Transnistria region heighten fears about violence spilling over into neighboring countries. The instability could also extend to North Africa and the Middle East due to grain shortages – especially wheat – and those regions’ dependence on Ukraine and Russia. They together supply more than a quarter of the world’s wheat.

The suspension of natural gas to Poland and Bulgaria, coupled with the ongoing invasion and other humanitarian crises, are prompting more swift diplomatic action and movement toward energy diversification than has occurred in previous decades. As International Energy Agency Executive Director Fatih Birol explained, “Nobody is under any illusions anymore. Russia’s use of its natural gas resources as an economic and political weapon shows Europe needs to act quickly to be ready to face considerable uncertainty over Russian gas supplies next winter.”

Click here to download a new Interos white paper that further explores Europe’s dependence on Russian natural gas: Report: Analysis of Russian Natural Gas in Europe – Interos.  Then, to learn more about how the Interos platform can help you stay aware of risks, visit interos.ai