Based on Interos’ unique supply chain analysis of the railroad supply chain, the most-affected industries are likely to be the automobile, chemical, energy, and agricultural verticals — with follow-on impacts reaching virtually every U.S. business and consumer. The strike could cost the U.S. economy as much as $2 billion per day.

While organizations looking to get in front of the issues can take steps to mitigate them and bolster operational resilience — it’s unlikely that even the most proactive organization would be fully insulated from a disruption of this magnitude.

Why Is a Freight Railroad Strike Potentially Happening?

In August of 2020, twelve railroad unions joined forces to sue Class 1 railroads over proposed benefits changes in their contracts, which included restricting access to certain medications and changing healthcare networks. By October of 2021, the courts had ruled in favor of the unions, stating that the Class 1 railroads would need to resolve the issues in good faith negotiation, directly with the twelve unions. This decision by the court ultimately granted the unions the legal right to a freight railroad strike if they could not reach an agreement with the Class 1 railroads.

On August 15, 2022, both the unions and Class 1 railroads reached an impasse in negotiations, causing a 30-day “cooling-off” period to be established. At the end of this cooling-off period, on September 15, 2022, the unions would be legally able to strike.

Hours before the rail unions were set to announce a nationwide freight railroad strike, both sides reached a tentative agreement after twenty hours of negotiations mediated by U.S. Labor Secretary Marty Walsh. The unions then had to return to their members and call for a ratification vote to fully approve the agreement. By the end of October, two unions — the Brotherhood of Maintenance of Way Employees Division and the Brotherhood of Railroad Signalmen — had voted against ratification of the agreement due to the lack of inclusion of paid sick leave.

The unions and the Class 1 railroads now have until November 19 to reach a new agreement, before the unions are legally allowed to strike — which means that companies need to be aware of their dependency on the freight railroad supply chain as soon as possible. 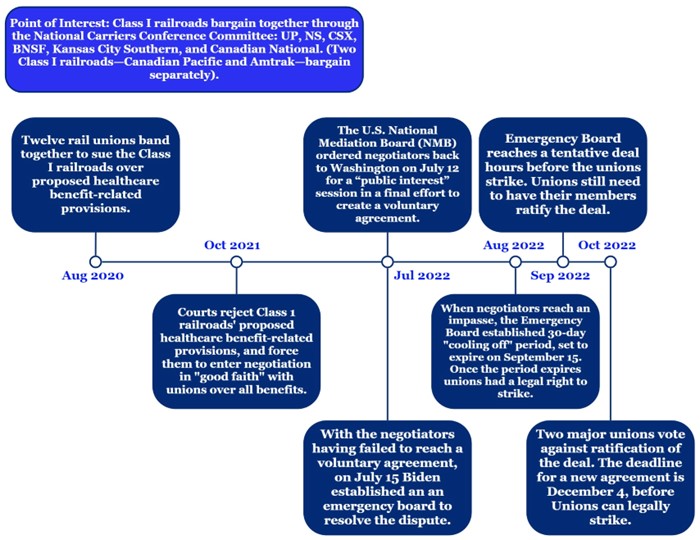 While a shutdown of Class 1 railroads would have far-reaching effects across virtually every industry, Interos’ analysis found the following verticals would see the most immediate and severe impact:

In the U.S. there are between 25,000 to 30,000 carloads of vehicles and auto parts moved by rail per week. This is due to much of the U.S. auto industry having their parts, or the car itself, assembled in Mexico, Canada, and the United States. Shipping by rail within North America is the most efficient way for companies to deliver automobiles to customers or dealerships, leading to nearly 75% of new vehicles in the U.S. being moved by freight rail.

On average, over 300,000 barrels of crude oil and 5 million barrels of propane are transported by rail in the U.S. every day. Additionally, 75% of coal produced in the U.S. is transported by rail. Given that coal makes up ~22% of U.S. electricity generation, the effect of a rail labor strike on energy prices will be drastic. Disruptions to the energy industry will occur in the lead-up to the deadline, as railroads cannot leave hazardous materials unattended in the case of a strike. This will cause railroads to curtail shipments prior to the actual strike.

20% of all chemical transportation in the U.S. is done via rail and Class 1 railroads moved an average of about 34,000 carloads per week of chemicals in 2021. This reliance on rail transit leaves the industry highly exposed to a rail labor strike. Over 50% of all rail chemical carloads consist of industrial chemicals, including soda ash, caustic soda, urea, sulfuric acid, and anhydrous ammonia. Additionally, 70% of the ethanol  an additive in most gasoline — produced in the U.S. is transported by rail.

Anytime there is uncertainty surrounding a rail labor strike in the U.S., the fertilizer industry loses five shipping days due to the ramp-down that is required to curtail shipments of hazardous materials prior to the deadline. Additionally, due to the recent shutoff of natural gas supplies to Europe, 80% of European production of fertilizer has been halted. A strike would only further destabilize an already-fragile fertilizer industry — significantly disrupting all of U.S. agriculture and food production. The industry is highly exposed to a rail labor strike. 774,000 carloads of corn, 296,000 carloads of wheat, and 299,000 carloads of soybeans were transported by rail in 2021.

What Actions Can I Take to Prepare for Railroad Supply Chain Disruptions?

While a deal between unions and Class 1 railroads is still a viable option, railroads will begin to curtail operations in the week before December 4th to ensure they can shut down safely and comply with regulations in case of a freight railroad strike.

Interos recommends firms begin acting to ensure their supply chains remain resilient and unaffected as soon as possible, by taking proactive measures and coordinating with suppliers. Our recommendations include:

Organizations looking to understand where the next big supply chain shock is coming from – and which suppliers they need to engage with to mitigate the impact – should consider investing in supply chain visibility and operational resilience solutions. Most organizations plan to implement them by Q2 2023 — a fact we learned from our annual supply chain industry survey.