Western governments continue to take actions to isolate and weaken Russia’s supply chain and overall economy in the wake of its invasion of Ukraine. On Monday, the United States took the aggressive move of sanctioning the Russian Central Bank. This will prevent American firms and citizens from doing any business with it.

Other prominent sanctions include:

European and allied governments are acting in concert on most of these sanctions; even the typically neutral Swiss joined the group of nations imposing sanctions on Russia.

These are extremely restrictive measures meant to prevent Russia from stabilizing the dramatic plunge of the ruble by selling other nations’ currency. Russia will have a difficult time stabilizing its banks and even the most basic necessities will soon be unaffordable to many of its citizens.

The Russian Central Bank joins a select group of world central banks that have been cut off from dollar transactions. This group includes Iran, Venezuela and Syria.

Governments have also delisted Russian banks and cut them off from trade financing. Under U.S. and most European Union sanctions, any entity that is 50% or more owned, whether directly or indirectly, by one or more blocked person is subject to the restrictions, even if it is not explicitly listed on the sanctions list.

It is important to note that most sanctions are still not targeting energy exports, and even the U.S. Treasury ban on ruble exchange makes exceptions for certain energy-related payments. 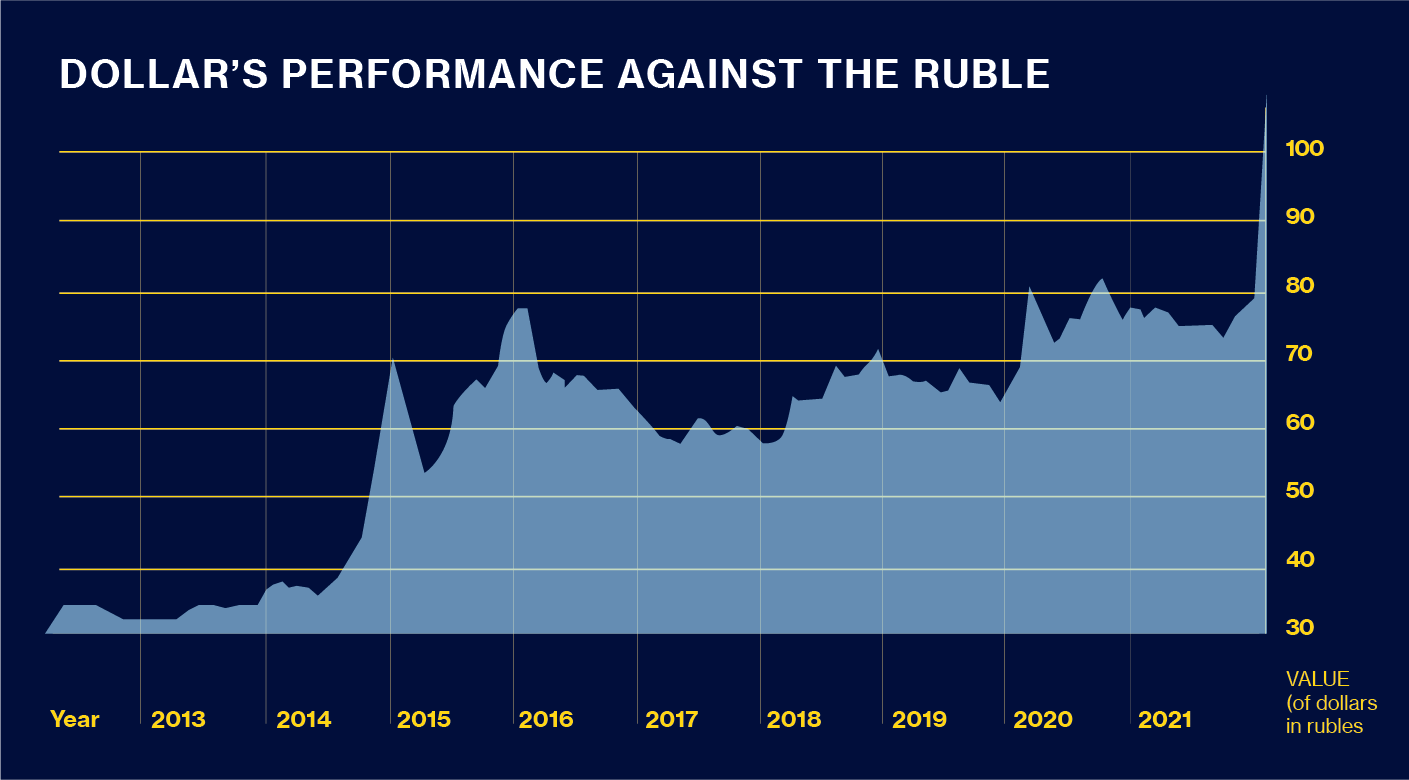 SWIFT is the principal method for financing international trade, so the removal of Russian banks will have implications for supply chain leaders when their organizations are attempting to buy products or services from firms located in Russia (see “Explainer” below).

The White House Released a joint statement reading: “This will ensure that these banks are disconnected from the international financial system and harm their ability to operate globally.”

The European Union, US, UK and Canada have banned seven banks from SWIFT. They are considered to be those most involved in financing the war and closely tied to President Vladimir Putin and it includes Russia’s second largest bank, VTB. Other entities include Bank Otkritie, Novikombank, Promsvyazbank, Rossiya Bank, Sovcombank and VNESHECONOMBANK (VEB). Sberbank and Gazprombank are likely exempted because most of the payments related to energy flow through them. Eliminating their participation in SWIFT would make it virtually impossible to process funds to pay for Russian oil and gas, which Europe relies heavily on.

Around 40% of Europe’s natural gas supplies come from Russia, and Germany and Italy are among the biggest users of SWIFT.

The SWIFT system processes around 10 billion financial messages a year, is based in Belgium and overseen by the G10 central banks. Russian transactions account for 1.5% of all of SWIFT’s global transactions annually. The U.S. and Germany are the biggest users of SWIFT to communicate with Russian banks.

The selective removal of Russian banks is part of an effort designed to “collectively ensure that this war is a strategic failure for (Russian President Vladimir) Putin.” This follows steps taken late last week by the E.U. and at least six other countries to impose more significant economic sanctions against Russia.

The countries imposing these sanctions announced the launch of a “transatlantic task force.” The task force will “ensure the effective implementation of our financial sanctions by identifying and freezing the assets of sanctioned individuals and companies that exist within our jurisdiction.”

Their action targeted its largest banks, as well as freezing the assets of certain Russian oligarchs and their families. It also directly targeted President Putin and his foreign minister, Sergey Lavrov, and other members of Russia’s security council.

Putin has accumulated over $600 billion in foreign reserves in an attempt to insulate his country from the economic crisis it experienced after the Crimea invasion and 2014 sanctions. But this strategy has failed. It is clear that Putin did not expect such quick, severe and coordinated steps to be taken against Russia.

The West has taken unprecedented steps to prevent Russia from using these reserves to undermine sanctions. To date, all 10 of Russia’s largest financial institutions – which collectively hold nearly 80% of the Russian banking sector’s total assets – have been targeted.

Looking just at the newly U.S.-sanctioned Russian financial institutions, an analysis of Interos’ global relationship data found over 920 distinct related entities in our platform. The majority of the entities directly affected are in the U.S. (8%), followed by the UK and Ukraine (6% each). The industries directly affected by these sanctions are primarily oil and gas (20%). Next are banks (18%) and other firms operating in global capital markets (6%). These numbers will grow exponentially as more sanctions are announced. Russian companies will continue to lose liquidity in equity markets and in their ability to raise capital around the world.

Example: A German company buys a product from Russia. They transfer money from their German bank account to the Russian company’s account using its SWIFT code.

The German buyer sends a message via SWIFT to the Russian company. The message says that the transfer of the money is incoming, and that it can access the funds.

Russian banks that cannot process these payments will be unable to facilitate international business. Their deliveries of oil, gas and other commodities would stop.

No robust alternatives to this system are available to Russia in the near term. After the 2014 invasion of Crimea and concerns about its dependence on SWIFT, the Central Bank of Russia developed its own payment system. This was titled the System for Transfer of Financial Messages (SPFS). The Russian government subsidizes SPFS to encourage usage of it. It includes 400 Russian bank users (more than in SWIFT) and accounts for around 20% of domestic transfers. However, only about a dozen foreign banks use it, including only one Chinese bank.

Continue to follow the Interos Crisis Resource Center and Blog as the crisis evolves in Russia and Ukraine. We will continue to post supply chain information and insights as they become available.