Freight trucking is an essential link in U.S. supply chains, transporting more than twice the value carried by other modes combined.  Its dominance is expected to increase by 50% over the next 25 years. However, the transportation industry is the largest emitter of greenhouse gases (GHGs) in the United States, a significant portion of which is links back to trucking. In 2018, freight trucking in the United States produced  more CO2 than the entire United Kingdom. Fortunately, there are some big changes underway in freight trucking to minimize their environmental footprint while maintaining operational efficiency.

New energy sources—natural gas, electricity, and hydrogen—are being increasingly implemented to reduce emissions and make trucking a safer, renewable industry.  A new report, the State of Sustainable Fleets, covers the state of technology in the auto transportation industry and recently surveyed the rapid innovation in fuel efficiency and vehicle emissions.  The report highlights new methods to reduce carbon emissions in trucking. The results are optimistic—among early adopters, 98% plan to maintain or increase their usage of eco-friendly trucks.

The most popular alternative fuel currently is natural gas, which produces 84-96% less GHGs than diesel, and 90% less carcinogenic particulates. Converting all diesel trucks in California to natural gas would reduce 3.4 million tons of GHGs each year, roughly equal to the emissions of Iceland. The efficiency of this process can be increased by collecting natural gas from other industries, such as waste management. The Noble Road Landfill Renewable Natural Gas Project, currently under construction in Ohio, will fuel approximately 725 trucks annually with natural gas that would otherwise be released into the atmosphere. One of twelve planned projects, the entire landfill system will reduce emissions equivalent to taking nearly half a million passenger cars off the road. While initial costs are usually the most prohibitive aspect to alternative fuels, diesel engines can be retrofitted to use natural gas relatively cheaply. Anheuser-Busch recently announced that it is transitioning 180 of its trucks, 30% of its dedicated fleet, to natural gas. This change will keep the company on target to reduce carbon emissions across its value chain 25% by 2025.

Battery-powered electric vehicles (BEVs) also are increasing in availability and popularity for commercial fleets. Depending on the local electrical grid, these vehicles can reduce GHGs by nearly 50% compared to diesel and produce zero tailpipe emissions or pollutants. Compared to natural gas and even fossil fuels, fueling stations are easy to construct anywhere—business and fleet owners just need a 240 Volt AC plug. Several companies around the world have chosen to convert their entire fleets to BEV. The Indian e-commerce platform Flipkart will be fully converted by 2030 to ship between their 1,400 locations, and converting to BEVs will allow the UK division of ABB to reduce their total GHG emissions by 20%. According to the State of Sustainable Fleets, among companies that have already purchased medium- or heavy-duty electric vehicles, 69% plan to pilot or purchase more soon. 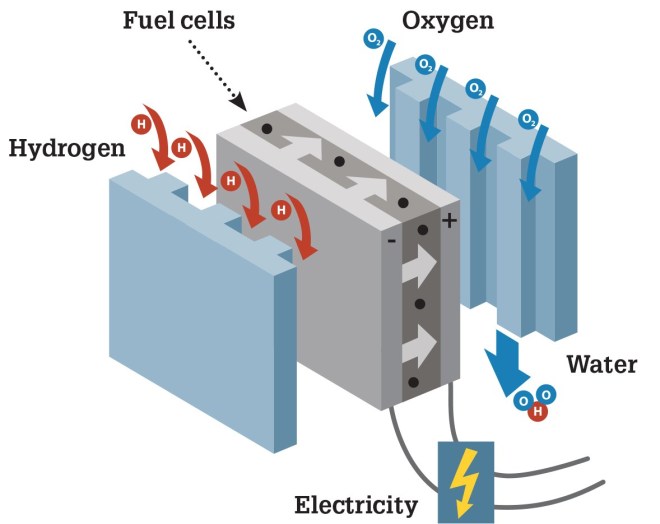 Anticipation is building for the next form of alternative engines: hydrogen fuel cells. The only emissions produced from these engines are warm air and water. Depending on the production method, hydrogen produces 45-98% less GHGs compared to diesel. Three times more energy dense than gasoline, hydrogen fuel cells are expected to achieve parity and surpass the driving ranges of diesel trucks within a few years. Current technology already allows drivers to travel an entire day without needing to refuel. Fleet-ready fuel cell freight vehicles have just been released by Hyundai, Nikola, and a partnership between Daimler &Volvo. Anheuser-Busch has plans to purchase up to 800 heavy-duty fuel cell trucks soon, further reducing their carbon footprint. While more fueling station infrastructure is needed before hydrogen can be implemented on a national scale, further innovation will only make this technology more attractive.

Governments around the world have pledged to make help this transition easier. California has ordered all trucks in the state must be zero-emissions by 2045 and has significant incentives for fleets to convert or purchase alternative fuel vehicles. This effort is paired with a mandate to phase out gas-powered passenger vehicles by 2035. The E.U. has also provided significant incentives for manufacturers to invest in and produce low-and zero-emission vehicles. The E.U. previously released a directive in 2014 to increase investment in infrastructure for alternative fuel vehicles. The Canadian government recently provided funding for 837 EV fast chargers, 23 natural gas refueling stations and 8 hydrogen refueling stations. These investments are critical for increasing the adoption rates for alternative fuel vehicles.

After nearly a century of diesel power, these new technologies present a paradigm shift.  As climate resiliency becomes a greater priority, paired innovation and adoption of eco-friendly fuels is crucial for delivering the two-thirds of goods that travel by truck smoothly with less harm. As these technologies become cheaper and more available, they will decrease emissions in supply chains across industries, minimizing their environmental impact and increasing resilience for the future.