Toshiba, GE, and J&J – What Big Corporate Breakups Mean for the Supply Chain

The notion of “too big to fail” gained prominence during the 2008 financial crisis, shifting entrenched perspectives toward landmark corporations. Since then, a very much still-ongoing pandemic has upended the global economy (and the supply chain it depends on) to an even greater degree. Massive technological and geopolitical shifts, coupled with shifting consumer behavior and attitudes, are further prompting renewed introspection as firms rethink resilience and the future of supply chain management in a post-pandemic global economy. Based on recent trends, corporations are again assessing their size, with events like the recent GE spin-off announcement becoming a growing – and potentially defining – feature of the shifting landscape toward greater resilience.

The End of the Conglomerate Era?

As alluded to above, within weeks corporate titans Toshiba, GE, and Johnson & Johnson all announced intentions to spin-off parts of their enterprise. Earlier this year, Dell Technologies made a similar calculation with the spin-off of VMWare, while Siemens and Honeywell also similarly pared down over the last year. In each case, creating a more efficient business model, optimizing the more profitable product lines, and streamlining business operations have been the driving factors behind the conglomerate breakups.

These recent breakups have been dubbed “the end to the era of the conglomerate.” However, they may also be a sign of greater confidence in the global economy. While spin-offs declined during the pandemic, these recent breakups might be an indicator of greater confidence in an economic recovery. Over the last decade, many conglomerates built specialized business lines that were quite distinct from other parts of the company — for example, the healthcare operations that will form the basis of the GE spin-off. The pandemic has accelerated these distinctions across business lines, while also amplifying differences in financial performance. The timing may be right for many corporations to build upon economic growth and seek spin-offs to optimize market and investment value as well as growth driven by innovation.

Moreover, the massive economic shocks during 2020 also revealed the fragility and insecurity of hyperspecialized global supply chains. While much attention has been on the efficiencies gained within business lines, discussions of potential negative outcomes for the future of supply chain efficiencies and of resilience in general are remarkably absent in talk about the impact of corporate break-ups. However, a quick analysis of these companies’ supply chains illustrates that these decisions have global implications and ripple throughout large, medium, and small businesses alike. 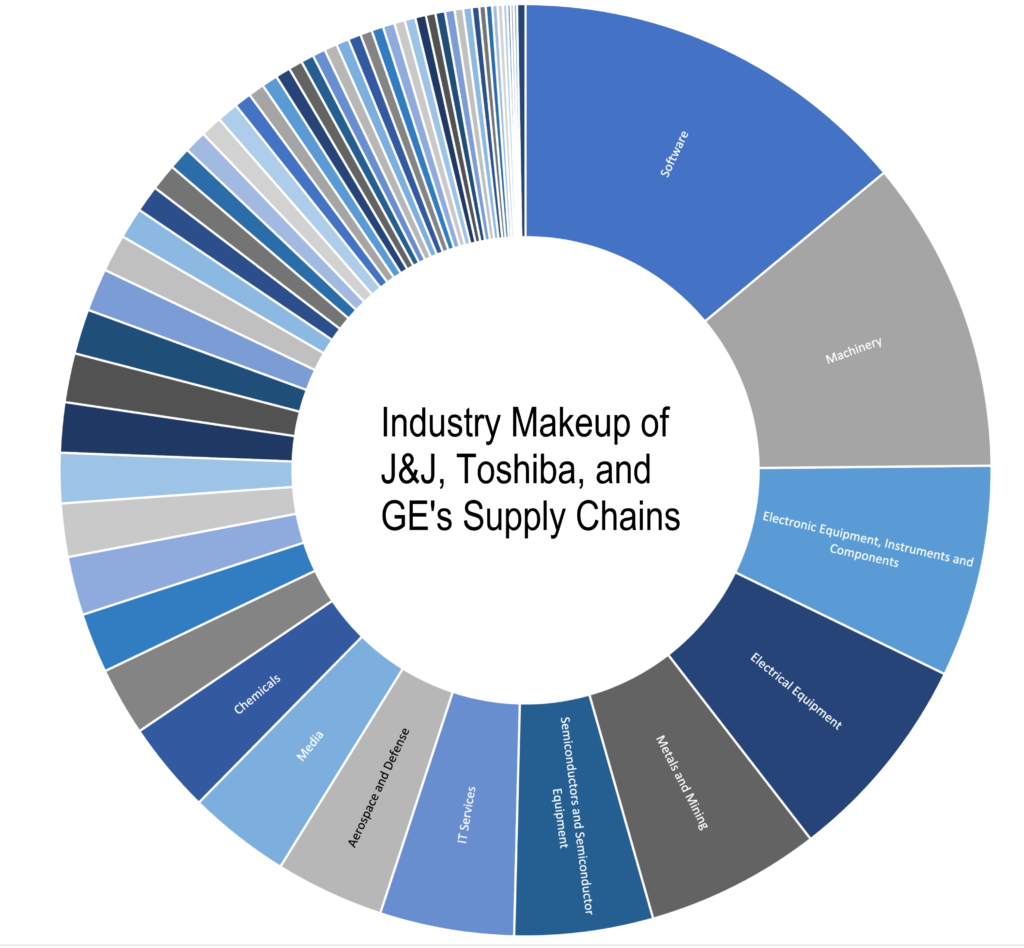 A quick assessment of the supply chains of recent conglomerate break-ups illustrates the global impacts of these spin-offs. They are not contained to one single country or industry, but rather ripple across the globe and across sectors. Across Toshiba, GE, and Johnson & Johnson, thousands of tier 1 suppliers are impacted. When extending out to the second and third tiers of those respective supply chains, the numbers jump into the hundreds of thousands of businesses that may be affected. This does not necessarily imply a negative effect, but rather uncertainty that may be introduced into the future of supply chains that continue to feel extended shocks as the global economy realigns and rebounds.

While a third of these companies’ tier 1 suppliers are located in the United States, countries across the globe – including China, the United Kingdom, Brazil, Australia, Egypt, and India – may also be impacted by breakups like the GE spin-off. In addition, the software, machinery, and semiconductor industries are the most prominent in the first tier of these companies, but the impact is much more expansive. From media to IT services to life sciences, companies across the globe and across industries may experience a jolt as these major conglomerates realign their business units and corporate structures. 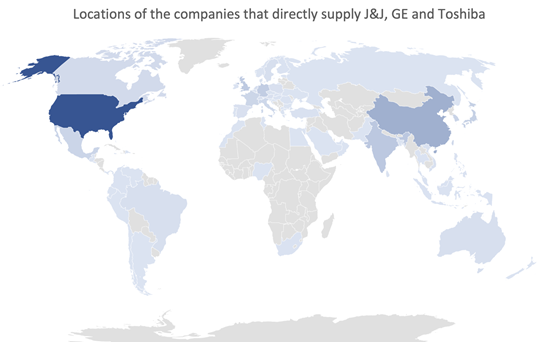 The Future of Supply Chain Ripple Effects in the New Normal

Is it truly the end of the conglomerate era or simply a sign of growing confidence in a transformed global economy? It could reflect a little of both, as new innovations, emerging technologies, shifting consumer demands, and a transition from “just in time” to “just in case” production alter strategic plans and the future of supply chains. As corporations continue to assess the best path toward resilience in a time of global disruptions, moves like the GE spin-off likely will continue to emerge as a profitable and efficient part of this calculus.

Over the course of the pandemic, major corporations that lacked visibility into their supply chains learned the hard way of the downstream concentration and geographic risks at far corners of their supply chain. With corporate spin-offs, firms that lack upstream visibility similarly may be surprised to learn that a distant spin-off may impact them. While spin-offs may be a path toward stability for those conglomerates, it could introduce uncertainty for their partners across their immediate and extended future supply chains.

The latest breakups are yet another indicator of the new normal, a time of uncertainty corresponding with dramatic shifts in the global economy, emerging technologies, and geopolitical upheavals. Will the need for renewed “focus” that is driving many of the spin-offs also include a new focus on resilience across supply chains? Is this part of a broader “end of the era of the conglomerate,” and if so, will certain sectors be more impacted than others?

At Interos, we will continuously monitor how these breakups propagate across supply chains, including the downstream effects on suppliers across a range of industries, and how they may impact risk across the supply chain ecosystem as companies continue to grapple with improving resilience in the new normal.