The Future of the Semiconductor Supply Chain

As the war in Ukraine continues, companies and countries are urgently assessing where the next major conflict and supply chain disruption may arise. As trade and economic friction grow between Western nations and China, concerns over China’s designs on Taiwan (and the impact of those plans on the global semiconductor industry) have increased. These concerns have only highlighted the need for greater visibility of sub-tier supply chains for critical commodities like semiconductors, and the need to intelligently diversify semiconductor supply chains. 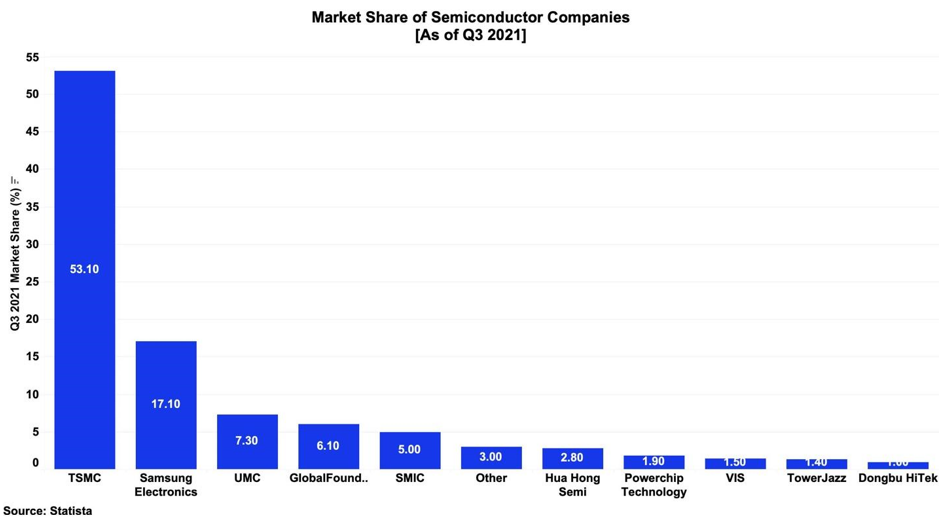 The market share of the global semiconductor industry is heavily concentrated in Taiwan, and in particular, Taiwan Semiconductor Manufacturing Co., Ltd. (TSMC). TSMC alone holds a majority of market share with 53.1%, followed by South Korea-based Samsung Electronics with 17.1%. Taiwan-based United Microelectronics Corp. (UMC) comes in third with 7.3%, bringing the market share concentrated in Taiwan to above 60%. Given Russia’s war in Ukraine, there is concern of similar territorial ambitions held by China regarding Taiwan which would disrupt future semiconductor production and global supply.

When considering disruptions to the semiconductor supply chain, the effect that COVID-19 has had cannot be overstated. However, this industry was already inundated with disruptions before the pandemic as well. Instances of earthquakes in the Pacific Rim, clean room contamination events, compromised materials making their way into processes, water supply shortages, cyber-attacks, facility fires, and power outages have all put upward pressure on lead times for semiconductor devices through the years.

There are several notable events which have adversely affected the semiconductor industry since just the beginning of 2020. The ongoing trade war between the U.S. and China raises the cost of certain goods and limits access to certain products by blacklisted Chinese entities. In December 2020, the U.S. added Semiconductor Manufacturing International Corp. (SMIC) to a trade blacklist due to a relationship linking SMIC to China’s military, limiting the already constrained pool of chipmakers from which American companies can receive their chips.

According to Interos data, Taiwan and Japan experience the most disruption events to their semiconductor manufacturing industries. Earthquakes account for a significant portion of disruptions in both countries. Moreover, captured Moderate and Major Impact events were concentrated in Japan.

Interos data also revealed that an estimated 45% of disruption events have significant ripple effects on the semiconductor supply chain. Their impact is somewhat ameliorated by the disaster-conscious design of many semiconductor fabs.

Cyber-attacks, like the malware virus that affected TSMC machines in 2018 or the ransomware attack X-Fab Silicon Foundries experienced in 2020, account for just 5% of all captured events, but data indicates a significant upward trend in their frequency since the onset of the pandemic. The increase stems from a rise in global cybercrime and state-sponsored hacking, particularly from state-sponsored groups in China seeking to steal intellectual property to bolster domestic chip manufacturing capabilities.

As the West imposes sanctions on Russia as its invasion of Ukraine continues, Russia is likely to respond against the West with targeted cyber-attacks. This industry could pose a potential target for Russian cyber-attacks, especially since export controls against shipments of semiconductors to Russia would significantly mitigate any negative effects directly felt by Russia as a result.

The American Semiconductor Industry: An Overview

While the U.S. has taken steps to mitigate the spread and ensuing supply chain disruptions precipitated by COVID-19, policymakers have also strived for an expansion of the American semiconductor manufacturing industry to offset future economic strain resulting from a global shortage of semiconductor devices.

Both chambers of Congress passed bills aimed at growing the American semiconductor manufacturing industry with funding incentives. These are the America COMPETES Act (H.R. 4521) which passed in the House in February 2022, and its Senate counterpart, the United States Innovation and Competition Act (USICA) (S. 1260) which passed months prior in 2021. Currently, reconciliation efforts are underway in Congress to agree on final texts and move this legislation closer to becoming law.

These bills also call for the establishment of a National Semiconductor Technology Center (NSTC) to provide a public-private consortium for advanced research, prototyping, and innovation. Current reconciliation efforts will need to address differences between the two bills, such as funding recipient eligibility and direct loan or loan guarantee authority given to the Department of Commerce.

Partly in response to these expected incentive programs, several prominent foundry companies have recently announced expansions in their U.S. operations. Announcements in 2021 included those made by Intel in March 2021, TSMC in April 2021, GlobalFoundries in July 2021, and Samsung Electronics in November 2021. This year, Intel announced a $20 billion USD investment for fabs in Ohio, and as of March UMC has reportedly been eyeing Detroit as a potential investment site for a new fab. Additionally, Micron Technologies has been scouting potential fab sites as part of a 10-year $150 billion USD investment plan in Texas, California, and Arizona.  The CEO of Intel stated in a recent Senate committee hearing that Intel would likely increase its Ohio investment and therefore production capacity were federal incentives to be made into law soon, underscoring the importance of this legislation to the semiconductor supply chain.

Though federal incentive programs would promote American manufacturing, a shortage of skilled workers in the U.S. to operate planned semiconductor fabs poses a threat to the success of these legislative efforts. According to a recent study, 82% of semiconductor industry executives reported a shortage of qualified job candidates. Moreover, an estimated 500,000 positions for engineers in the semiconductor field will open in the next decade, creating a gap which the U.S. will likely need to rely on foreign infusions of talent to fill.

There does not appear to be a consensus on when the current semiconductor shortage will end. Opinions range from the second half of 2023 to well into 2024. Although foundries are investing capital and in some cases are already breaking ground on new fabs, many of these new fab sites will not be online until 2024 or 2025. Moreover, those slated for completion in 2022 and 2023 are not guaranteed to meet their deadlines as COVID restrictions and supply chain delays for construction materials and highly specialized equipment can be expected to continue. Furthermore, with the addition of production capacity comes increased demand as an increasing number of manufacturers rely on semiconductor devices.

Companies should expect the semiconductor device shortage to continue through 2023, underscoring the need to adapt to this environment. Several options are available to companies that rely on semiconductors:

Automotive manufacturers’ operations have been held up by power management integrated circuits (PMICs). PMICs cost less than $1 USD but their short supply has cost automotive manufacturers billions of dollars as they have been forced to stall operations as they await PMIC deliveries. Since “semiconductor” is an umbrella term for multiple specific-function devices, end-users should identify the exact products presenting problems within their supply chains. Afterwards, Interos automated solutions and machine learning technologies can aid companies to restore or improve their supply chains.

Supplier diversification is only possible with a comprehensive understanding of the supply chain. The Interos Resilience platform enables visibility into these sub-tiers, allowing companies to identify nodes of concentration as well as alternative suppliers in the event of disruptions.

Identifying reliance on specific components and assessing the global situation can inform which components would benefit from having an expanded inventory to hedge against disruptions.

Unfortunately, front-end fabrication is just one piece of the puzzle in this complex industry and diverse supply chain. Bottlenecks elsewhere, from the supply of materials to the delivery of specialized equipment, can have significant ripple effects on capacity, not to mention disruptions in shipping and logistics that can add delays to lead times.

Any approach to expanding chip capacity at scale and understanding your supply chain risk exposure must be multi-faceted and thorough, leveraging real-time sub-tier supplier insights that provide holistic, multi-risk-factor monitoring.

Then, to learn more about the Interos platform, visit interos.ai.