When supply chain executives are asked about the risks that most concern them, geopolitical issues such as wars, social unrest, and major terrorist attacks are typically low on the list. Or at least they used to be. Soon, the supply chain impact of a Chinese invasion of Taiwan may top that list.

We’ve already seen how war can shift perceived supply chain risks. Just prior to Russia’s invasion of Ukraine, for example, an Interos survey of 1,500 procurement and IT security professionals found that geopolitical considerations were by far the lowest ranked risk factor when evaluating suppliers. Less than a quarter placed it in their top 3 risks.

Asked the same question a few weeks into the war, however, and that figure had more than doubled to over half of the sample.

The events in Russia and Ukraine demonstrate how military conflict can quickly disrupt global supply chains that are heavily dependent on a particular region or country. This is often referred to as concentration risk.

In this case, the impact is largely around the availability and cost of key commodities and raw materials — oil and gas, metals such as titanium and palladium, and agricultural crops such as wheat and corn.

The supply chain impact of a Chinese invasion of Taiwan would be rather different — and, in all likelihood, much greater.

Russia’s action has reignited fears about China’s intentions towards Taiwan, an island of almost 24 million people situated 100 miles off the Chinese mainland.

Since Taiwan’s declaration of independence in 1949,  China has claimed sovereignty over Taiwan and regards it as a rebel region that must be reunited with the mainland, by force if necessary.

Taiwan is a vitally important hub in global electronics supply chains, with 53% of its exports by value in 2021 being electronic components and technology products, according to official data.

The global leader in semiconductor manufacturing

In both geopolitical and supply chain terms, Taiwan’s importance to the world economy is heavily skewed towards semiconductor manufacturing.

In 2020, Taiwan had a 63% market share of global chip production and integrated circuits (ICs), and micro assemblies accounted for 35.6% of the country’s exports by value — 10 times more than the next highest category (see table below). 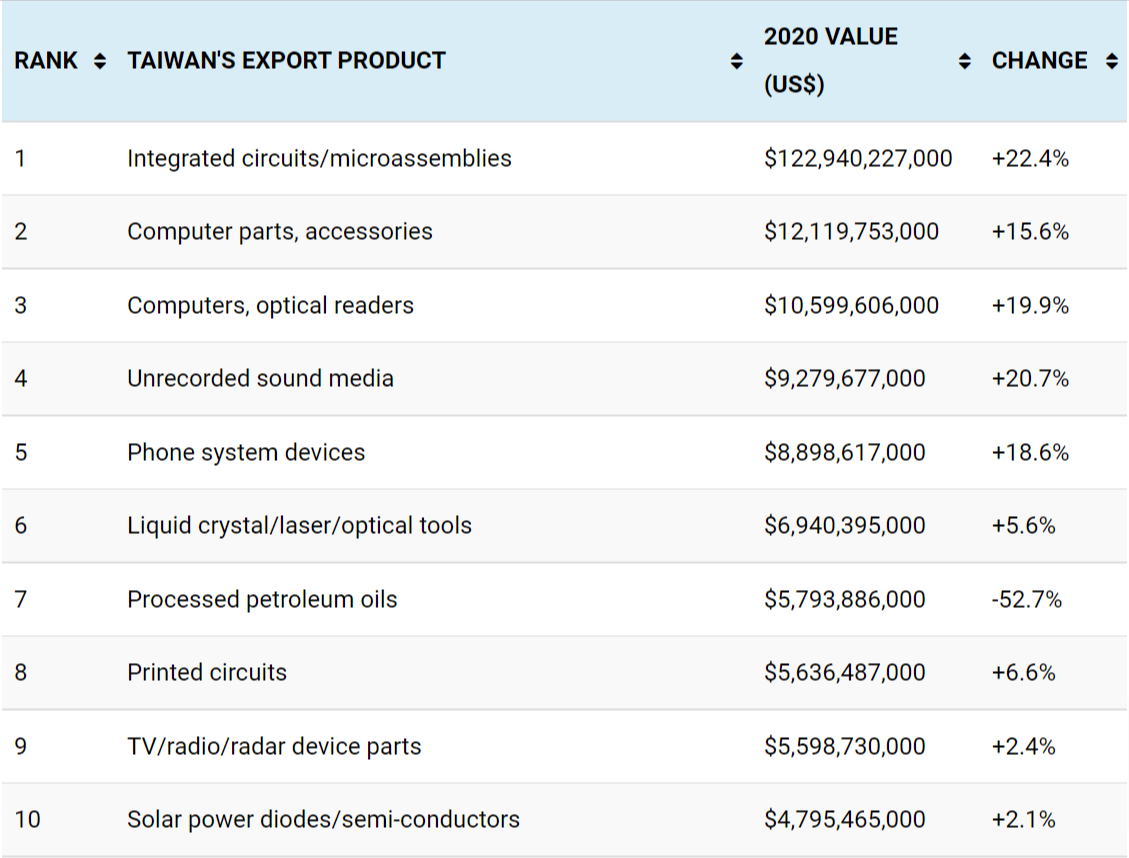 Interos data analysis suggests that while TSMC, as a contract manufacturer to the semiconductor industry, has a relatively small number of direct customers in the U.S. and Europe, its importance at tiers 2 and 3 is enormous.

The COVID-19 pandemic has created a severe shortage of chips for automobiles, computers, games consoles, medical devices, and other electronic equipment.

This crisis, and growing awareness of just how concentrated semiconductor manufacturing is in Asia (South Korea and China being the two other main producers after Taiwan), has prompted the U.S. and European governments to call for geographic diversification of capacity.

TSMC is currently building its first U.S.-based fab in Arizona, due to open in 2024, while Intel and Samsung — two other industry heavyweights — are investing tens of billions of dollars in advanced chip-making plants in Germany, Ireland, and Texas.

However, it will be several years before this new capacity comes online. In the meantime, the possibility of a Chinese invasion of Taiwan remains a critical threat to global supply chains that depend on semiconductors and other vital electronic components.

Caught in the crossfire between the U.S. and China

Taiwan is at the center of the superpower battle between the U.S. and China — a geopolitical and economic struggle for supremacy that was ratcheted up beginning in early 2018 with the trade war and tightening controls on the sale and usage of key American and Chinese technologies.

Sino-American friction over Taiwan has increased during the past year, with both nations stepping up air- and sea-based military drills in the area around the island.

This situation is of particular concern to neighboring Japan. In late February, an opinion poll found that 77% of Japanese people were worried that Russia’s invasion of Ukraine could increase the likelihood of Chinese aggression.

Whether China attempts to take Taiwan by force or not — and there are plenty of good reasons commentators think it won’t (see below) — the supply chain impact of a Chinese invasion on global semiconductor and electronics supply chains is concerning.

Aside from the obvious geopolitical threat, Taiwan is also at risk from natural disasters. The island is situated on the Pacific Ring of Fire, a 25,000 mile (40,000 km) zone that experiences a majority of the world’s most powerful earthquakes and around three-quarters of its volcanic activity.

Any catastrophic event in Taiwan, whether caused by human or environmental factors, would have a rapid and financially damaging impact on global supply chains that could significantly outstrip that experienced during Russia’s war on Ukraine.

The message to global supply chain leaders with respect to Taiwan is fivefold:

If the above steps seem impossible within your current supply chain or procurement programs, it may be time to stop relying on the often-manual, reactive capabilities of supply chain risk management and time to start leveraging technology-driven solutions within an operational resilience framework.

Fill out the form below to download Interos’ full report on Taiwan and the semiconductor supply chain or, to learn more about the Interos platform, visit interos.ai.