Significant U.S. policy shifts toward technology exports to China have occurred over the last few weeks. By some accounts they are the biggest shifts in decades. Indicative of the growing implementation of prohibitions and restrictions, the U.S. has announced a steady drumbeat of export controls aimed at both crippling Chinese semiconductor manufacturing and fostering more secure and trusted technology ecosystems within U.S. supply chains.

While these latest restrictions are touted by some as unprecedented, they are not surprising. Instead, they are part of the growing trend we have detailed regarding the collision of economic warfare and compliance. Since 2016, the U.S. Department of Commerce’s Entity List alone has added over a thousand Chinese and Russian companies. Inclusion on the Entity List prohibits U.S. companies from purchasing goods and materials from that entity. There are dozens of other restriction lists as well, including those within the Departments of Commerce, Treasury, Defense, and State and Federal Communications Commission. 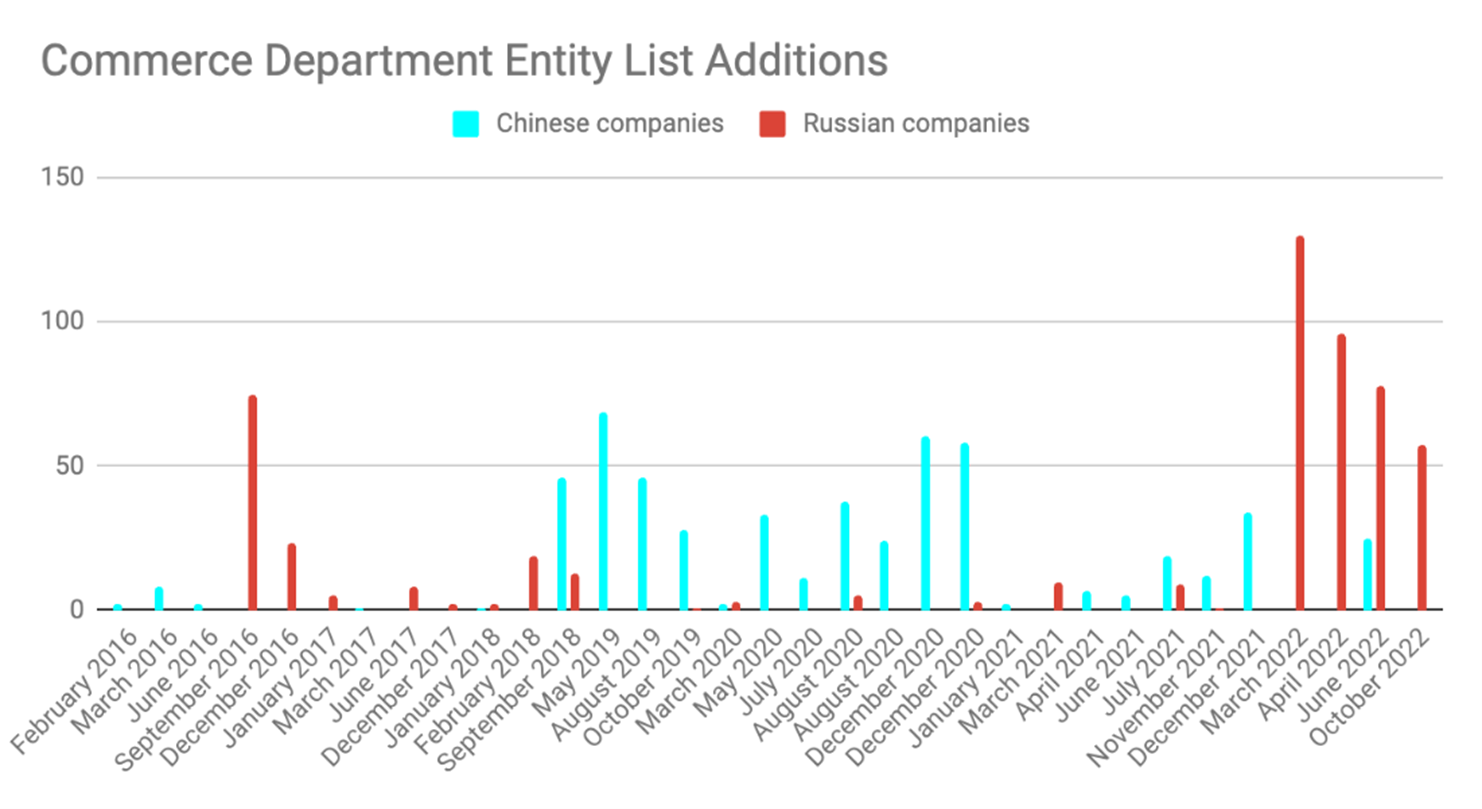 The Latest Wave of Restrictions: Semiconductors

The Biden Administration announced the most extensive technology restrictions on October 7th, aimed at limiting semiconductor materials shipped to China. The new restrictions expanded the scope of the Export Administration Restrictions (EAR) on 28 Chinese companies, the majority of which were already on the Entity List, adding a new license requirement and additional rules. These rules target U.S. national security concerns, and add certain advanced semiconductor technologies to the Commerce Control List (CCL) as well as rules pertaining to end-use controls and additional license requirements.

However, the new rules do not stop there. They also add 31 Chinese companies to Commerce Department’s Unverified List, a designation for companies ‘whose bona fides’ have not been verified; that is, where U.S. officials have not completed site visits to establish whether they can be trusted with critical technologies. If the U.S. government is prevented from future site visits, these companies will then be escalated to the Entity List.

This latest round of restrictions announcements comes on the heels of three other announcements since late September. On September 20, the Federal Communications Commission (FCC) added China Unicom and PacNet/ComNet companies to its Covered List, referring to Section 2 of the 2019 Secure and Trusted Communications Networks Act. On September 30, Commerce added 57 additional Russian entities to the Entity List, bringing the total to well over 500 entities since Russia’s invasion of Ukraine in February. A few days later, on October 5, the Department of Defense updated Section 1260H of National Defense Authorization Act 2021. This update included over a dozen new Chinese companies identified as military companies operating in the United States.  Two days later, President Biden announced the sweeping restrictions targeting the Chinese semiconductor industry.

These additions alone have a far-reaching impact. Over a third of Fortune 500 companies have had at least one of these new additions within the first tier of their supply chain. This more than doubles to almost 80% when looking at their tier 2 and tier 3 relationships. In short, this is a significant compliance risk that for some may be below the radar. Organizations should review their supply chains for these additions to assess their own risks.

Watch to see how to identify restrictions risks within the Interos platform.

The United States is not alone in these latest restrictions. As Commerce’s Russian restrictions press release notes, 37 allies and partners have implemented similar controls. The European Union has issued its eighth tranche of Russian sanctions, this time targeting critical chemicals. Earlier this year, the European Union presented a new supply chain law targeting human rights violations in response to the growth of human rights violations, especially in China. The unprecedented implementation of these restrictions by the U.S., allies, and partners is introducing new compliance challenges and extremely difficult to stay on top of without significant effort.

But that effort is essential for resilience in the ‘new normal.’ Geopolitically-driven restrictions are splintering global supply chains along geopolitical fault lines, indicative of the core characteristics defining the emerging world order. As the Economist notes, a new macroeconomic era is underway. But it is more than that. The October 7 restrictions have already led to almost $9B in losses for Chinese semiconductor stocks and U.S. suppliers are halting business activities and pulling out staff in China. There likely will be some retaliation as China also has its own unreliable entity list and pursues the ‘Made in China 2025’ agenda.

At Interos, we will continue monitoring the wide range of restrictions, their subsequent compliance challenges, and their role in the ongoing transformations reshaping globalization and supply chains.