A comment from a Volkswagen executive in the Wall Street Journal this week sums up the challenge facing many European and international companies when it comes to the crisis in Ukraine. “Ukraine is not central to our supply chain, but suddenly we discovered that when this part is missing, it is.”

The war has already taken an extraordinary toll on individuals, families, and communities in Ukraine. Another added layer of anxiety comes from employees and businesses not knowing the full extent of their commercial ties and dependencies on Russia or Ukrainian supply chains in their extended supplier networks.

Bad intelligence derived from opaque supply chains can have perilous implications on businesses and individuals. For instance, data from Interos’ global relationship mapping platform shows that less than 250 German companies have direct tier-1 suppliers in either country. But, when the focus is expanded to include their suppliers’ suppliers the number of connections jumps massively. 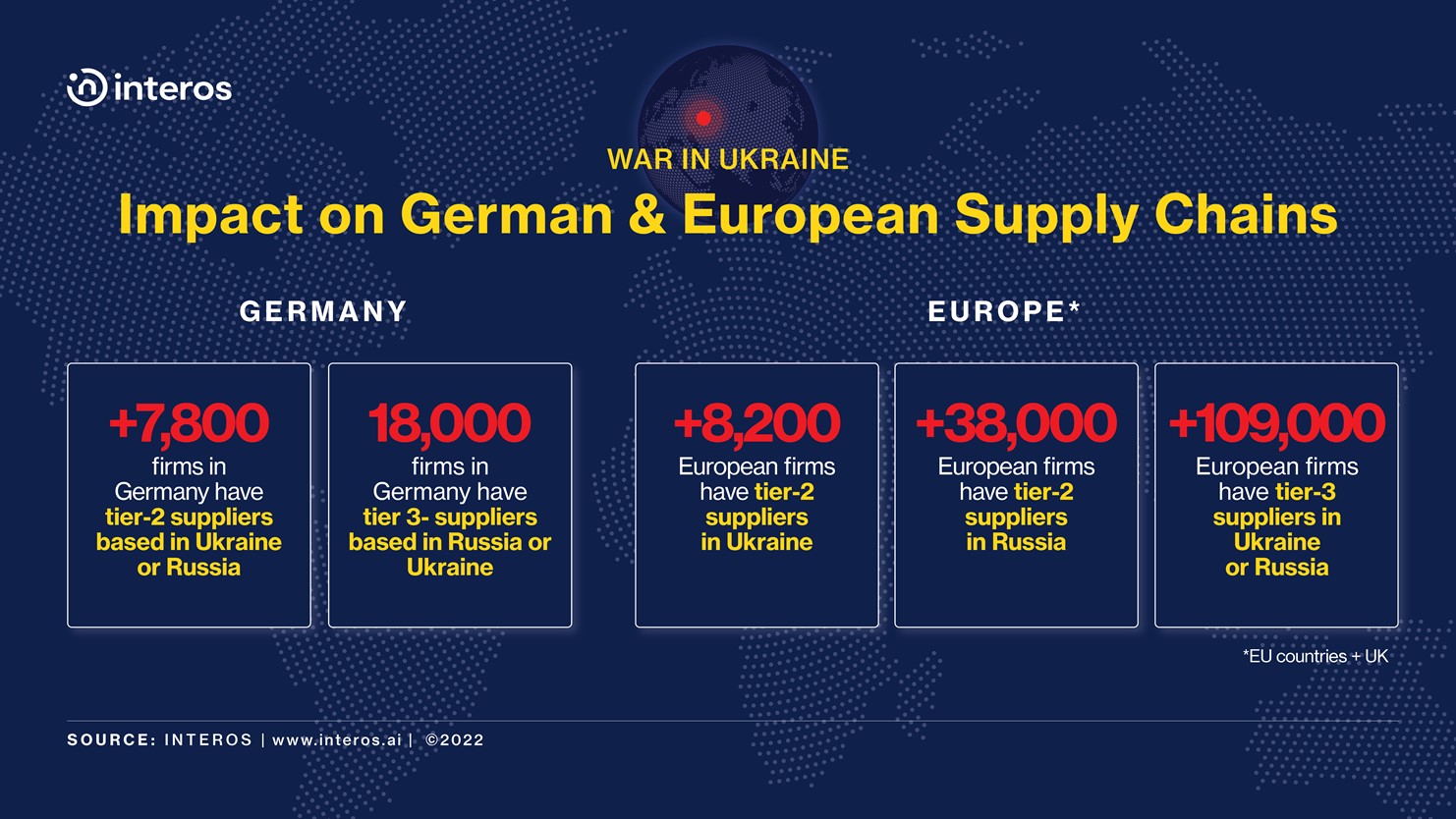 Germany-based firms across all industry sectors have:

Broadening the focus to the European Union as a whole plus the UK, the number of tier-2 and tier-3 connections with Russian and Ukrainian suppliers is greater still:

A survey of German supply chain and procurement executives conducted by Gartner last year found that 80%  of companies thought they had good visibility of tier-1 suppliers (more than three-quarters of companies, parts and locations known). However, only 7% said the same about tier 2, and only 5% about tier 3.

Given these findings, the fact that a company like VW is unaware of its risk exposure to the war Ukraine until critical parts stop arriving at its car factories should come as no surprise.

In a lean and just-in-time industry like automotive, where every part is critical no matter how cheap or small, the impact of disruption is more immediate than in other sectors. Which is why VW stopped production at its plants in Zwickau, Dresden and elsewhere this week.

European supply chain leaders – like their counterparts in the U.S., Asia and elsewhere – may not have all the data they need to optimize their scenario modelling and risk mitigation strategies, but they are working towards improving  these capabilities.

Gartner’s 2021 supply chain risk and resilience study found that “better supply chain visibility” was the biggest area for improvement. 70% of the sample ranked it in their top three. 40% said it was their number one priority.

Many of these improvement efforts and investments will not come in time to enable European companies to avoid supply chain disruptions stemming from the war in Ukraine. It is also unlikely that most businesses have insulted themselves from the impact of sanctions imposed on Russian firms as a result of Putin’s invasion.

This horrific and unjustified conflict has already upended decades of conventional thinking about war and international business, as well as the supply chains that underpin them. The data on tier visibility shared above is crystal clear evidence that despite limited immediate connections, deeper analysis shows just how interconnected and interdependent our economies, businesses, and people are.

Greater awareness of the level and nature of that interdependence is essential to building a supply chain and business community that can withstand immense shocks and continue to provide essential services and information in times of crisis.

Continue to follow the Interos Crisis Resource Center and Blog as the crisis evolves in Russia and Ukraine. We will continue to post supply chain information and insights as they become available.

The Supply Chain Implications of the Russian Energy Ban