A long time ago in a supply chain far, far away…

The Millennium Falcon might look like a piece of junk but it can do point five past lightspeed and
– as they say in the bars of Tatooine – it’s got it where it counts.

Not bad for a bucket of bolts won in a card game.

In celebration of May the Fourth, Interos turned its artificial intelligence-powered supply chain
risk management technology on the company that makes the ship that made the Kessel Run in
less than 12 parsecs.

Our report is based on a detailed analysis of Star Wars lore with all companies mentioned
appearing in canon, the official collection of stories and history that Lucasfilm accepts as part of
the Star Wars saga. Our analysts dove deep into the available data, conducting a legitimate
analysis using the Interos platform.

What we found is a supply chain littered with risks as the Falcon operates in a universe with just a little bit of political instability, making it more than difficult to ensure the procurement of the
right part at the right time. This may go without saying, but it turns out an intergalactic war
fought between all-powerful space-wizards is bad for the widespread availability of necessary
parts and raw materials.

Let’s dive into our insights. Please note that none of our analysts died to bring you this
information, but there were algorithms and machine learning involved. 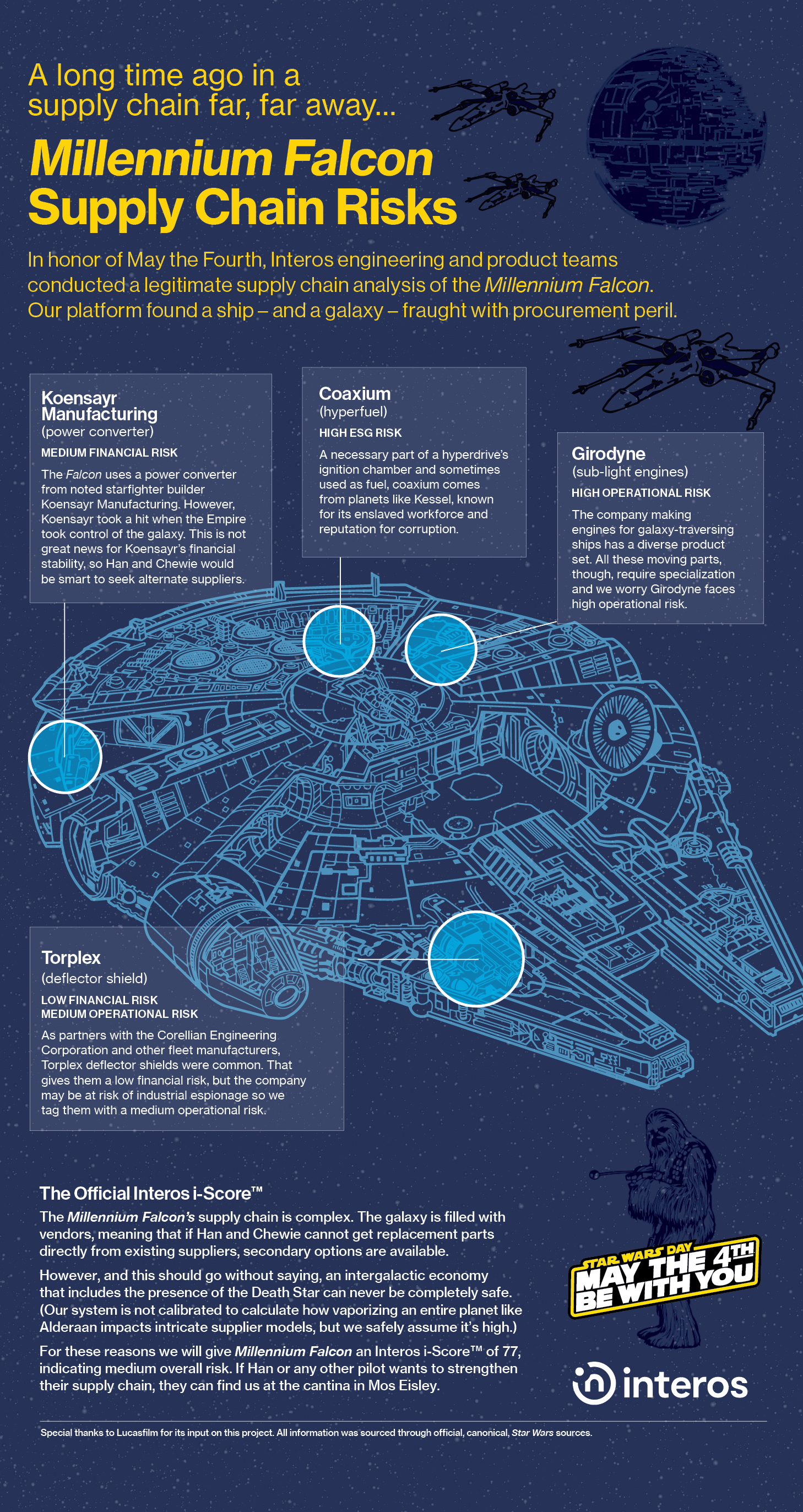 The Falcon uses a power converter from Koensayr Manufacturing, perhaps one of the top
makers of starfighters in the galaxy. However, Koensayr took a hit when the Empire took control
of the galaxy, losing out on several government contracts it held with the Galactic Republic. This
is not great news for Koensayr’s financial stability, so Han and Chewie may want to keep an ear
open for a new power converter supplier, just in case.

As partners with the Corellian Engineering Corporation (CEC) and later Sienar-Jaemus Fleet
Systems, Torplex deflector shields were quite common in a galaxy rife with competitors. That
gives them a low financial risk, but the company may find itself at risk for espionage with other
players in their field, so we tag them with a medium operational risk.

A necessary part of a hyperdrive’s ignition chamber and sometimes used as fuel, coaxium
comes from planets like Kessel, known for its enslaved workforce and reputation for corruption.
After its rise, the Empire began to attempt to monopolize production of the substance as well.

The company that makes engines for starfighters and other galaxy-traversing ships has a fairly
diverse product set. All these moving parts, though, require specialization and we worry
Girodyne finds itself at a high operational risk, since it leans so heavily on its own suppliers for
success.

The maker of the Falcon’s tractor beam emitter found itself in a good spot, thanks to
relationships with CEC and the Kuat Drive Yards, two major ship producers.

The Falcon likely used tibanna gas to cool its hyperdrive, which would be abundantly available
in Cloud City. Sadly, Han and Chewie’s last trip there ended… poorly. Cloud City remains on
many intergalactic restrictions lists as of this writing, so the Corellian Engineering Corporation
may want to look for suppliers elsewhere.

The Millennium Falcon’s supply chain certainly has its challenges. The galaxy is filled with
spaceships and spaceship parts, meaning that if Han and Chewie cannot get a replacement
part directly from a supplier, there are certainly secondary options available.

However, and this should go without saying, an intergalactic economy that includes the
presence of the Death Star can never be completely safe. (Our system is not calibrated to
calculate how vaporizing an entire planet like Alderaan impacts intricate supplier models, but we
safely assume it’s high.)

For these reasons, we will give the Corellian Engineering Corporation, makers of the Millennium Falcon, an Interos i-Score™ of 77, indicating medium overall risk. If Han or any other pilot is
worried about their ship’s supply chain and ever wants to improve their operational resiliency, they
can find us at the cantina in Mos Eisley.

Special thanks to Lucasfilm for its input on this project. All information was sourced through
official, canonical, Star Wars sources.

We also encourage you to watch Obi-Wan Kenobi, the new Star Wars show that premieres on
Disney+ on May 27. May the force be with you.