Global sales of electric vehicles (EVs) hit the accelerator pedal last year, with their market share speeding past 10% of new car registrations in the first half of 2022.

But from a supply chain perspective, the rapid growth of EV sales poses two particularly significant and worrisome challenges:

In recent months, the CEOs of several auto makers, including Tesla, Rivian and Stellantis, have spoken out about a looming supply shortage of Li-ion batteries during the next 3-5 years – one potentially far worse than the current semiconductor crisis.

Their concerns center around a projected deficit in the availability of lithium and cobalt – two of the main ingredients in battery cells – along with a lack of future capacity to refine these materials and manufacture the much higher battery volumes required.

Last week, the world’s biggest producer of lithium for EV batteries warned of a tight supply market for the rest of this decade.

High demand and constrained supply have already caused significant raw material inflation, particularly for lithium. Prices for battery-grade lithium carbonate are up 375% year on year, and 116% in 2022, according to Benchmark Mineral Intelligence (BMI).

This has forced auto makers to raise list prices for EVs, and at least temporarily halted the notion that lower battery costs will make EVs more affordable for consumers. 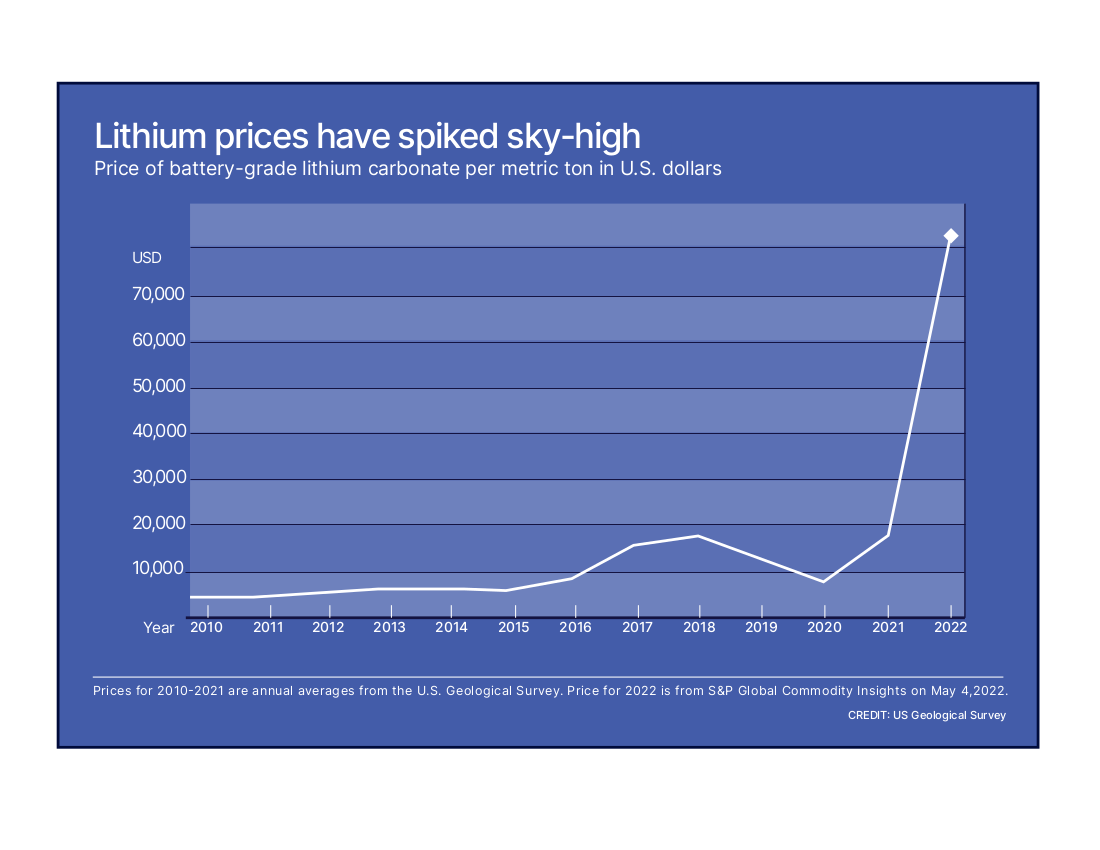 Battery making is dependent on China and Russia

Concentration risk is also a major concern. The latest global mining data shows that extraction of cobalt, graphite and lithium are highly concentrated in the Democratic Republic of the Congo (DRC), China and Australia respectively, based on the Herfindahl-Hirschman Index.

The DRC, which produces 70% of the world’s cobalt supply, is tainted by the use of child labor. And the second biggest source of cobalt is Russia, which is also the leading producer of battery-grade nickel. 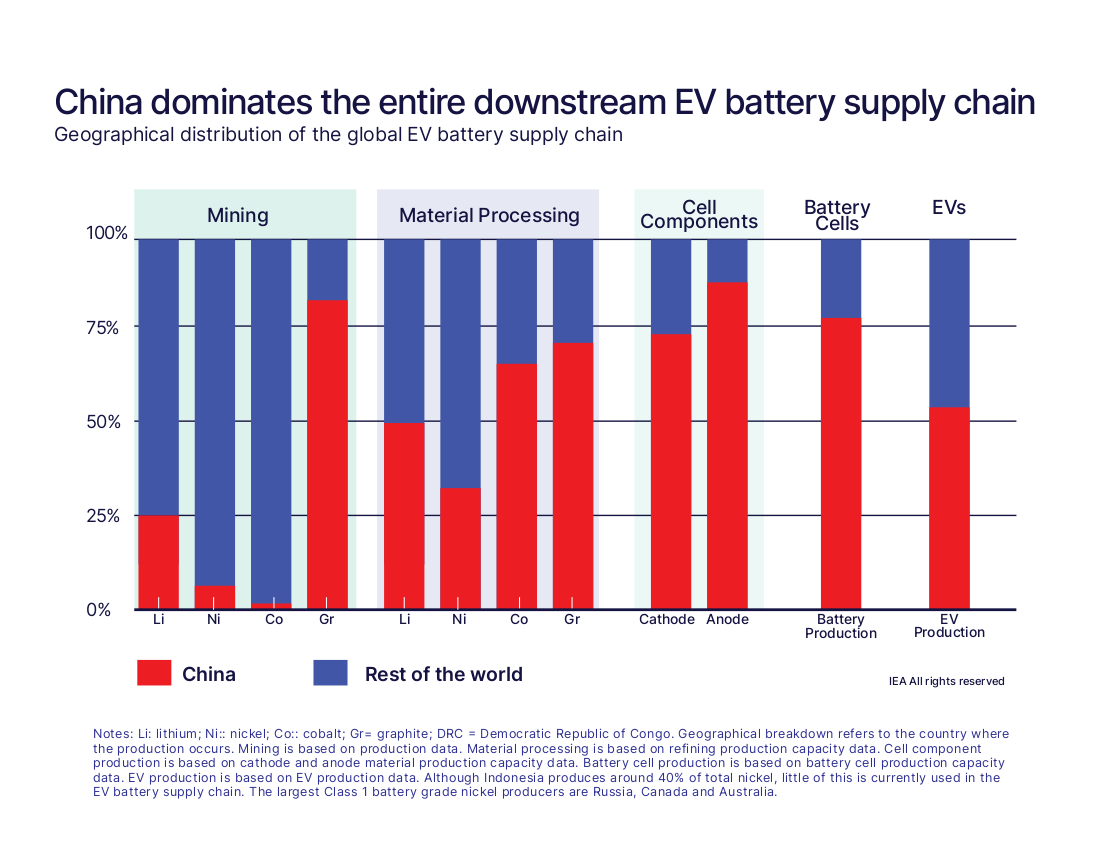 An Interos survey of 750 procurement executives in Q1 found that 85% were concerned that their supply bases were too concentrated in certain geographic regions, such as China.

A similar share of participants in the aerospace & defense (A&D) and IT & technology sectors – both also significant users of Li-ion batteries – took the same view.

An analysis of Interos’ global relationship platform data reveals that: 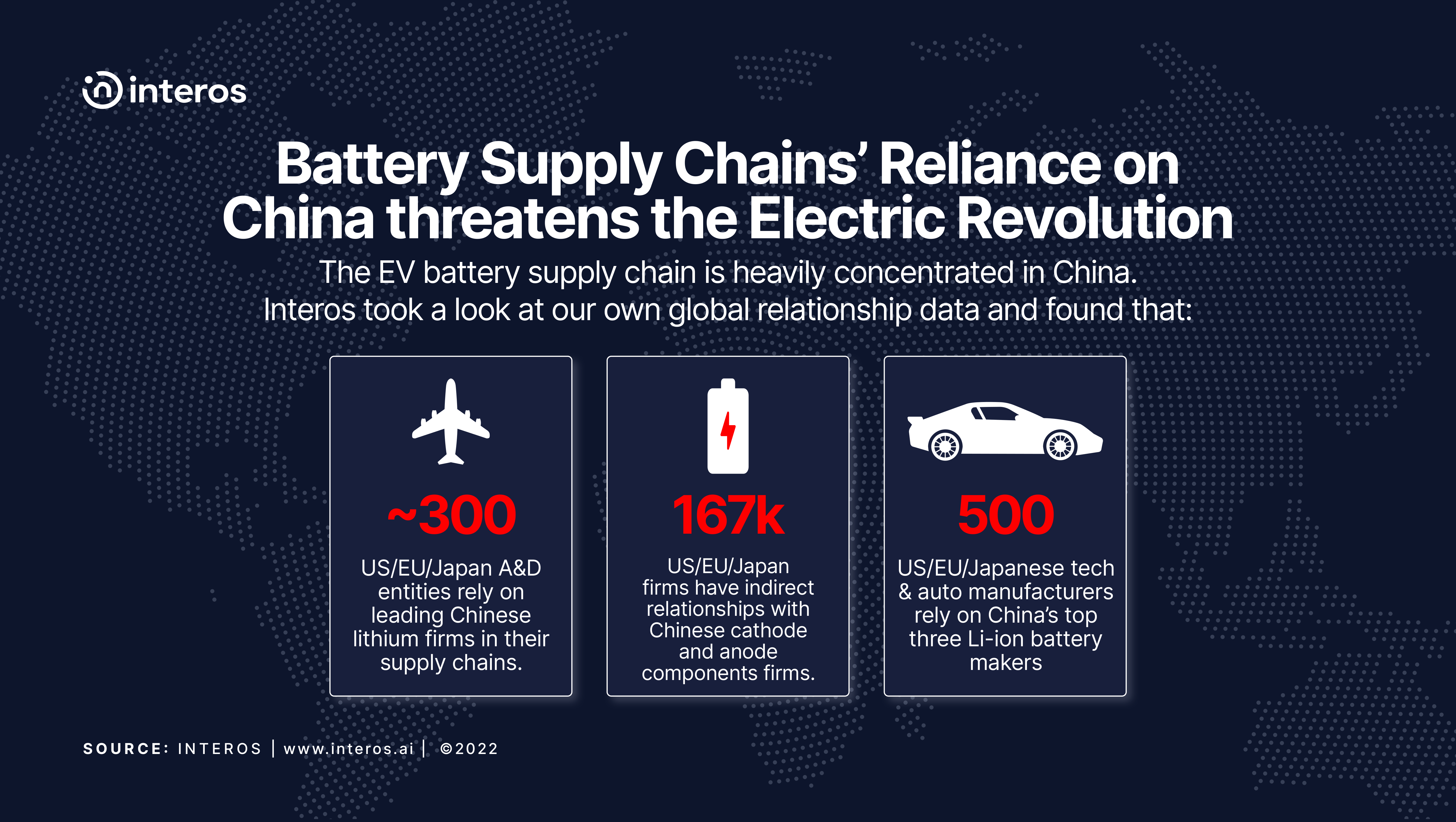 The dependence on Chinese refining, component and battery manufacturers is of concern not only to companies, but also to many Western and Asian governments.

Last year the U.S. Department of Energy published a blueprint for lithium-based batteries. In the context of a market that is expected to grow 5-10 times in size by 2030, it calls for the development of a domestic supply chain to support EVs, electrical grid storage, aviation and national defense.

The plan includes more secure access to raw materials; the elimination of cobalt and nickel from battery formulas; and the expansion of onshore processing, cell production, pack manufacturing and recycling capacity. 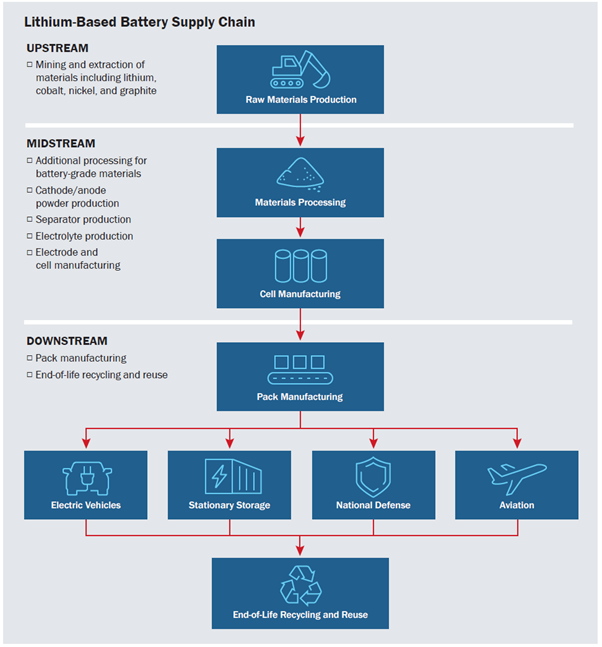 The European Commission unveiled a similar strategy back in 2018, while in Japan the Battery Association for Supply Chain was established last year, with 55 member firms spanning all industry segments, to develop policy recommendations.

Auto makers aren’t waiting around for national governments to reshape battery supply chains. Many are now pursuing their own strategies in an effort to head off future supply chain disruptions. The two main ones are:

Changing battery chemistries is another strategy being pursued by auto makers such as VW and Tesla to improve range, lower costs and reduce dependence on raw materials such as cobalt. But, as with the development of new manufacturing plants, this will take several years to fully implement.

In the meantime, vertical integration – a characteristic of the early automotive pioneers, but out of fashion in recent decades – seems to be the order of the day, as the industry seeks to minimize its vulnerabilities and regain control of electronics supply chains.